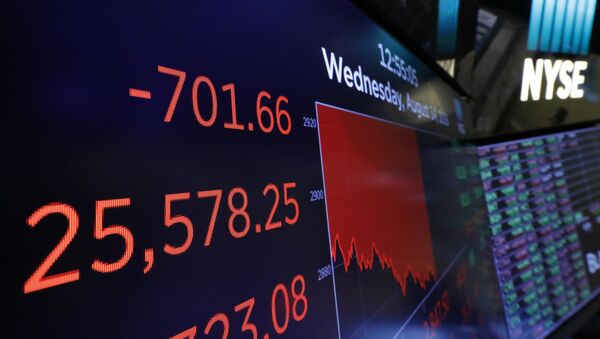 © AP Photo / Richard Drew
Subscribe
The US could potentially face a recession amid the COVID-19 outbreak as global coronavirus cases top 100,000, Dr. Jack Rasmus, a professor of economics at Saint Mary's College of California, told Sputnik's Loud & Clear on Friday.

Although the US Centers for Disease Control and Prevention (CDC) has recommended that employers “actively encourage sick employees to stay home,” that advisory is unlikely to be heeded, Rasmus noted.

“A lot of folks will continue to go to work because they simply can't afford not to. Half of the people in this country only have $400 in emergency funds - in other words, they are living paycheck to paycheck,” Rasmus, the author of “The Scourge of Neo-Liberalism: US Policy from Reagan to Trump,” told hosts John Kiriakou and Brian Becker.

The CDC has faced backlash over the past week because its testing kits for the coronavirus, made in an unidentified Atlanta lab, were found to be contaminated, resulting in delays to testing in the US. However, labs around the country are expected to test about 400,000 patients by the end of the week using revised kits.

“A lot of people are going to continue to go to work, and a lot of folks have the virus, and they’re contagious, but they have no symptoms. So, how do they know, right? We don’t have enough test kits … and some of them were defective. California, last I heard, only had 1,200 of these kits. I mean it’s crazy but it’s all part of [US President Donald] Trump's cutting back on Health and Human Services here. We’re not prepared … The number of infected is far larger, maybe 10 times more at least of what’s being reported because of the testing situation,” Rasmus explained.

When this article went to publication, 299 people in the US have been confirmed infected with the virus, and at least 15 people have died.

Stocks closed Friday with the Dow Jones Industrial Average down by 256.5 points. The S&P 500 slid by 51.57 points and the Nasdaq Composite by 162.98. According to the Wall Street Journal, the yield on the benchmark 10-year US Treasury note dropped below 0.7% on Friday, a sign that investors are worried about the economy.

On Friday, the cost of Brent crude oil fell by 9.4% to $4.72 per barrel. During a Friday meeting with OPEC and other oil-producing countries, Saudi Arabia could not convince Russia to reduce global supply to boost the price of oil.

The up-and-down week followed the stock markets’ worst week since 2008, losing an estimated $5 trillion in value.

“The low yield on the 10-year Treasury [bond] is a sign that the investors are very concerned about future growth in the economy,” said Eric Jacobson, a research analyst at global financial services firm Morningstar, told the Washington Post. “That’s what happens. When people are worried about everything else, they run to Treasurys because they know they are going to get paid back.”

“Now you’ve got production not only being affected by supply chain shutdowns here in the US. A lot of intermediate goods, particularly in the auto [industry] coming into the US, [are] not coming now. You’ve got a demand channel problem, not just a supply chain channel problem. You’ve got the travel industry - hotels, airlines, and cruise ships. Other retail is beginning to be affected. And of course, travel, restaurants, public events of various kinds - this is what is called the demand channel for the economic contagion of this virus - as well as a supply chain channel. But then you don't hear too much talk about the financial asset channel of the propagation of this economic problem,” he said.

“What we see going on today: stock markets collapsing and the Federal Reserve cutting interest rates by 50 basis points with absolutely no effect. It still keeps collapsing,” Rasmus told Sputnik.

The International Air Transport Association (IATA) on Thursday revealed that airlines could lose up to $113 billion this year due to the COVID-19 coronavirus outbreak. In addition, the Federal Reserve said in a statement on Tuesday that would cut US interest rates by half a point in an unusual move ahead of its upcoming monthly policy meeting on March 17-18 in order to mitigate threats to the economy stemming from the viral outbreak. This followed similar moves by the Bank of China and other financial institutions around the globe.

“This financial thing is beginning to snowball. You’ve got oil [prices] collapsing now that Russia and OPEC are not having an agreement. You’ve got industrial commodities collapsing. You've got currencies collapsing. What’s going to happen to emerging markets when interest rates fall almost to zero? … If these financial assets keep falling, particularly oil, you will see big problems,” Rasmus explained, also noting that the US economy is currently on the trajectory for a recession.

“It’s the financial assets markets we’ve got to watch very closely. I suspect you’re going to hear some announcement over the weekend here. They’re [the Trump administration] probably going to try to cut the payroll tax again, devastating Social Security financing like [former US President Barack] Obama did … What you’re not seeing is a global monetary coordination of reducing rates, just the US, because other countries are already having negative rates,” Rasmus explained.