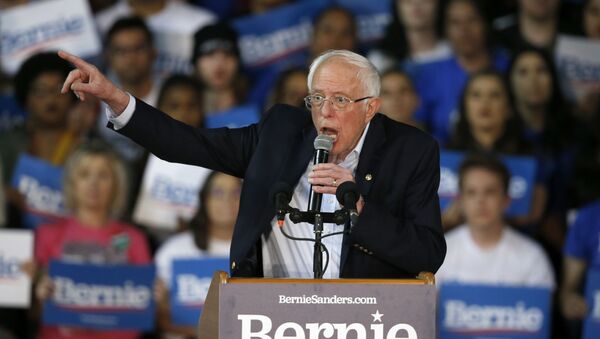 The man who waved a swastika flag at the Vermont senator’s campaign rally described himself as “a stunt activist” and is known to have posted offensive materials on his own YouTube channel. The latter is now banned due to non-compliance with the platform’s content standards.

Bernie Sanders has lashed out at the Nazi flag stunt that a man pulled at the Democratic presidential hopeful's rally in Phoenix, Arizona, earlier this week.

Sanders, who if elected would become the first Jewish US president, expressed being utterly “shocked” by the incident, and he has very personal reasons for it: many of the Vermont senator’s relatives were killed in the Holocaust.

He said that although he distinctly heard people booing, it was not until he left the stage, that he realised what it was all about.

“I speak not only as a Jewish American but on behalf of the US troops who died fighting Nazism. It’s horrific, it’s beyond disgusting to see, in the United States of America, that people would show the emblem of Hitler and I was shocked to hear that later", he said.

He acknowledged that his campaign events are at times attended by “Trump people", but “this was something different", he said as “someone brought forth the most detestable symbol in modern history”.

“The Teflon candidate” specifically singled out the police for dealing with the incident, as they rushed the man, identified by police as an extremist due to his carrying Third Reich insignia – from the rally, adding he had felt completely safe.

The activist, who waved the Nazi flag, has described himself as a "stunt activist" and is known to have frequently posted videos on his YouTube channel of him infiltrating events for Jewish and Muslim entities.

A spokesman for YouTube told The Guardian that the video-sharing platform axed the man’s channel on Friday for violating the service’s terms and conditions, under which content “promoting violence or hatred against individuals or groups” is effectively banned.

Backlash over the stunt likewise ensued on the internet, with one posting:

“The people who hate Jews should hide. They should be embarrassed to express their bigotry publicly. They should believe it will cost them social standing".

They should be embarrassed to express their bigotry publicly. They should believe it will cost them social standing.

Crawl back under your rock with your flag.

…while another brought up Sanders’ direct rival for now, Joe Biden:

Joe Biden will stop at nothing to sink Bernie... This is a new low.

“Speaking as an American white Christian republican. This is disgusting and goes way beyond what our world is about. None of that matters. We are brothers and sisters. Mothers and Fathers. Sons and daughter. Stop it", another weighed in, with many more echoing the stance:

That is truly despicable

Hatemongering is a crime

This is hate speech, it should be illegal. Obviously many in this country cannot handle the responsibility of free speech. This is just terrorism

While many suggested it could be “a sign of intent", one woman even proposed her own scenario of battling hate groups:

The problem is that they *like* our anger. When we are outraged they feel powerful. We need to ridicule them. Sing the "Hitler! He only has one ball..." song. Spill syrup on their pants. Wipe your nose on a corner of their flag and say, "boy! Hope I don't have coronavirus! "