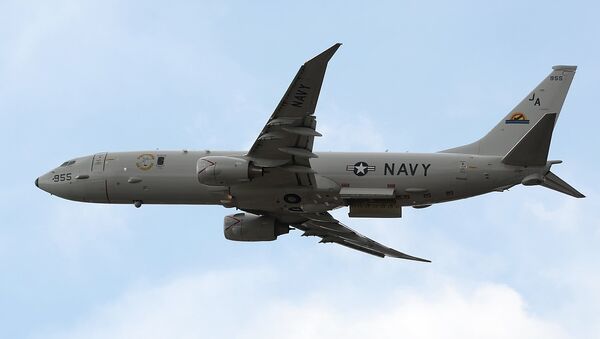 CC BY-SA 2.0 / aceebee / Boeing P-8A Poseidon
Subscribe
The US called out China more than a week after Beijing allegedly fired a laser weapon at the Pentagon's P-8A Poseidon, with Chinese defence authorities arguing the “aircraft's behaviour was unfriendly in intention".

China's Defence Ministry has dismissed as incorrect a report that one of its ships fired a laser last month at a US Navy surveillance plane: it “does not accord with reality", the ministry said in a statement, with spokesman Ren Guoqiang quoted on Friday as saying that a Chinese squadron was conducting routine drills in international waters on 17 February when the incident allegedly took place.

In Beijing’s first comments on the US report, Ren took aim at an American P-8A Poseidon, stating it was carrying out “long-period circling reconnaissance at low-altitude despite repeated warnings from the Chinese side".

“The American aircraft's behaviour was unfriendly in intention and unprofessional by operation, which severely threatened the safety of the vessels, aircraft, and crew of both sides", he explained.

More than a week passed after the alleged incident before the US accused the Chinese ship of firing a laser at a US surveillance aircraft while it was over the Philippine Sea west of Guam, a US island in Micronesia, in the Western Pacific - something the US has raged about as unsafe and in violation of international accords.

According to a statement by the US Pacific Fleet, although the laser was not visible to the naked eye, it was detected by sensors.

The said incident brought about the latest accusation that Chinese forces had used lasers to harass and potentially damage US and other nations' military aircraft and personnel. Meanwhile, Beijing has repeatedly denied the charges, accusing foreign aircraft and vessels of challenging the country’s security.

The Philippine Sea lies to the north and east of the South China Sea, where the US Navy has been frequently taking warships, as well as reconnaissance planes, drones, and patrol aircraft. Beijing has for decades been disputing the status of a slew of territories in the South China Sea that it lays claims to - the Paracel and Spratly Island, and the Scarborough Shoal, to name a few. It has therefore been vehemently opposing US operations in the sea as those that undermine China’s sovereignty and security interests.

In December 2019, a naval aviation division of the People's Liberation Army Southern Theatre Command completed an aerial early warning and reconnaissance training exercise, which experts said would boost China's defence capabilities in the South China Sea. The new scheme will not only spot US vessels and aircraft and instruct Chinese warships and fighter jets to expel them, but also register US electromagnetic signals.

10Pro
7 March 2020, 10:49 GMT3
000000
The plane was built by Boeing. the worlds' least reliable plane maker. The installation of substandard unreliable second hand parts on a modified unsold 737 NG. The same model plane. With the short service life wing "Pickle Fork". Faulty parts on this plane. Should come as no big surprise. For American Officials speaking with a forked tongue Has been a standard fixture since 1776.