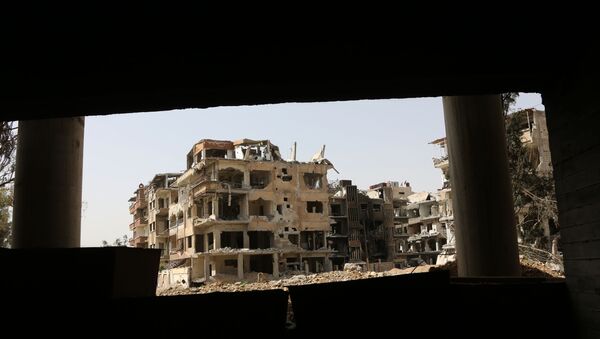 The Organisation for the Prohibition of Chemical Weapons (OPCW) previously lambasted two whistleblowers who had questioned the findings of the watchdog's report on the alleged chemical weapons attack in the Syrian city of Douma in April 2018.

Two whistleblowing chemical weapons inspectors at the OPCW have written formal letters to the watchdog's Director-General General Fernando Arias, obtained by the Grayzone, in which they request that their findings concerning the OPCW Douma report "get a fair, transparent, and scientific hearing".

The two whistleblowers participated in the mission on the ground ("fact-finding mission, or FFM) to determine whether chemical weapons had actually been used by the Syrian government, but were later excluded from the process, while important facts were doctored and omitted from the final version of the OPCW report, a series of documents released by WikiLeaks has indicated.

The first letter is written by "Inspector A" (as the OPCW dubbed him), who is actually known as Ian Henderson, a South African engineer and veteran OPCW official, who offered a detailed assessment of the two gas cylinders found at the scene of the alleged chemical attack. Henderson, once again, draws attention to the fact that he and the other inspector both took part in the FFM in Douma and took to their task with the maximum amount of professionalism and skill that they possess.

"Therefore, in Douma (and Damascus) and for months afterwards, we worked on, lived, and breathed the investigation, with the express purpose of establishing what had happened. This involved countless hours of technical discussions amongst team members to share information and experiences; on witness accounts, toxicology, chemical sampling and analysis, and the cylinders", Henderson writes.

Henderson then calls for a transparent scientific treatment of their findings, once again pointing to the fact that their findings were omitted from the final FFM report and that the work which followed was done without the inspectors ("the Douma team") who were on the ground and provided crucial initial findings.

"We want to demonstrate transparent scientific rigour. The Douma FFM team was cut out of the drafting of the final FFM report, at the instruction of the Chief of Cabinet, who then appointed the Team Leader and Head of FFM to complete the task without any consultation with the Douma team. [...] the drafters subsequently reversed the findings and rewrote conclusions, without explaining why", Henderson says.

Henderson also pointed out that he and "Inspector B", being at the top of their careers, had no logical reason to "go rogue".

"Why would a pair of the top Inspection Team Leaders, both with impeccable records… suddenly 'go rogue'?… Our sole duty is to be true to the facts and the science, and once that has been achieved, we will gladly accept the proven and agreed scientific outcomes."

Apart from reiterating their calls for transparency and a scientific hearing, Henderson added new important details about the two cylinders from Douma. One of the most important findings by Henderson was that those cylinders, which rebel groups claimed had discharged chlorine killing several dozens of people, were in fact placed there intentionally, which means the whole "attack" was staged.

In his letter to General Fernando Arias, Henderson says that the upper part of the building where the cylinder was found and the basement are not connected, meaning chlorine could not be discharged at the balcony, where the cylinder was lying, and then make its way downwards to kill people, as claimed by the rebels.

The second letter is written by "Inspector B", speaking on the condition of anonymity, who took part in developing the initial version of the OPCW report. In his letter to OPCW chief, "Inspector B" reiterates the statements made by his colleague and says that the only reason they challenged the OPCW report on Douma was not to harm anybody or push what the watchdog called was their "personal views", but to shed the light on the true facts.

"You need only look at our impeccable records and support to the TS over a combined tenure of almost 30 years. That we would suddenly 'go rogue' at the autumn of our careers, with nothing to gain and everything to lose, defies all logic. Why would we risk so much? To push a personal 'view'? Hardly. Something had gone wrong inside the OPCW sir. And we wanted you to know. It’s that simple", the second inspector writes.

On 6 February, the OPCW issued what it called findings of possible breaches of confidentiality with regard to the two whistleblowers' exposure of the watchdog's manipulation of facts concerning the April 2018 Douma chemical incident. The watchdog also claimed they did not have evidence to back up their views.

In response to the claims by the director-general, which according to the second inspector were "replete" with references to those "views" ("They are individuals who could not accept that their views were not backed by evidence"), "Inspector B" explained that that was not how a true scientific investigation works and that they could not accept a scientific investigation that "is not backed by science".

"'Views' are not the currency of scientists and engineers. Facts, evidence, and hypotheses are. Views are by their very nature biased. They are personal beliefs or thoughts that are not necessarily testable. A hypothesis, on the other hand, must be testable, and once tested, it can be supported by evidence", he said.

In March, the OPCW concluded that chlorine was most likely used in the suspected April 2018 attack in the city of Douma, northeastern Syria, where, according to local militants cited by Western media, toxic gas came from cylinders dropped from aircraft. They claimed Syrian government forces, who had complete air superiority at the time, were responsible for the alleged attack.

Syrian President Bashar Assad accused Western powers of using "stories" about the Syrian army's use of chemical weapons as a "pretext for direct military intervention" against the country.

Russian officials have revealed that the equipment used to make advanced explosives and chemical weapons at labs in recently liberated Douma had been made in Europe and North America. The Russian Foreign Ministry also stressed that the OPCW had ignored the evidence provided by Russia and Syria, confirming that the attack had been staged by the White Helmets and expressing concern that the report was deliberately aimed at justifying foreign strikes against Syria.

The White Helmets claim to be an NGO and a rescue organisation, however they have on numerous occasions been spotted working with the al-Nusra Front and working in areas where armed groups and outright terrorist groups operate.