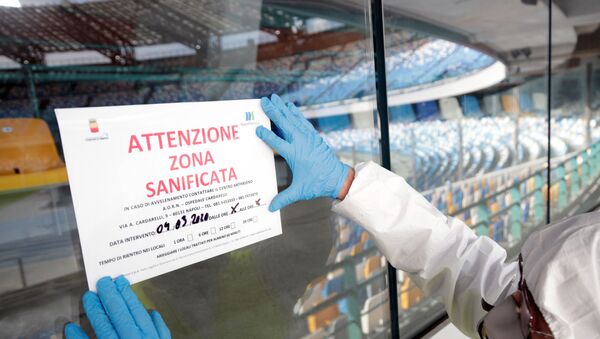 ROME (Sputnik) - Italy's death toll from the coronavirus disease (COVID-19) grew by 41 to 148 over the past 24 hours, with the total number of infected people exceeding 3,800, Angelo Borrelli, the head of the national Civil Protection Agency, said on Thursday.

"As for those who have recovered and been discharged, today, the number of such people has increased by 138 to 414. In addition, 41 people have died in the country. Their age ranged from 66 to 94. We are talking about people with fragile health, often with health pathologies", Borrelli told reporters.

As of Thursday, nearly 98,000 cases of the coronavirus have been reported globally, with over 3,340 deaths, a vast majority of which were in China’s Hubei province where the virus originated. At the same time, around 54,000 people have recovered.

The outbreak of pneumonia caused by a new strain of coronavirus was first identified in the Chinese city of Wuhan, Hubei province, last December.

China's response to the coronavirus has been swift and sweeping. Clinical trials of a vaccine against COVID-19 in China will most likely begin in late April, Chinese vice-minister for science and technology Xu Nanping said in late February.