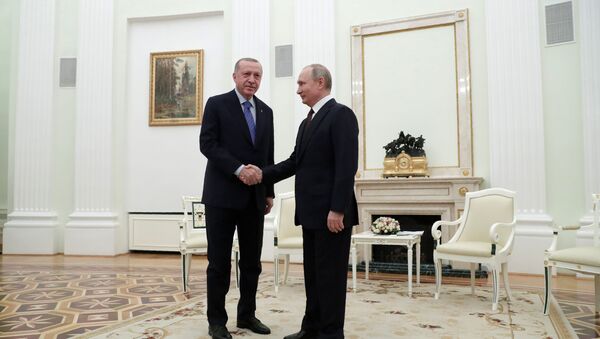 Erdogan previously said he had asked Putin to "step aside" in Syria and allow him to deal with Damascus "face to face", while Syrian President Bashar Assad stated in an interview just one day before the Putin-Erdogan meeting that the conflict between the Turkish people and the Syrian people is "illogical".

Moscow earlier stated that Ankara had failed to fulfil its commitments under the 2018 Sochi Memorandum, which stipulated demilitarisation in northern Syria. According to the agreement, Turkey was obliged to secure its border with Syria and separate jihadists in Idlib from other armed anti-government factions willing to engage in negotiations with the Syrian government.

The two meeting of the two leaders, expected to focus on tensions in Syria's Idlib, started at 14:06 Moscow time (11:06 GMT) in the Kremlin.

"They talked for three hours. They have been communicating together with delegations for 30 minutes already", Peskov said.

The Russian and Turkish presidents are continuing their talks behind closed doors in the Kremlin. They are expected to negotiate a decision on Syria that is acceptable to both sides and then invite members of their delegations when needed.

Putin on Turkish Losses in Syria: No One Knew About Servicemen's Location
11:10 GMT 05.03.2020
Putin and Erdogan Agree to Talk Situation Over to Avoid Deterioration of Russian-Turkish Ties

"Thank you very much for agreeing to come to us. We always have issues to discuss, and now the situation in the well-known area of Idlib in Syria has escalated so much that it, undoubtedly, requires our direct face-to-face dialogue", Putin told Erdogan at the beginning of their talks.

The Russian president also expressed condolences to Erdogan over the death of Turkish soldiers in Syria.

"At the beginning of our meeting, I would like to once again express my sincere condolences over the death of your servicemen in Syria. Unfortunately, as I have already told you during our phone call, nobody, including Syrian troops, had known their whereabouts", Putin said,

The Russian leader added that the Syrian side had also suffered serious losses recently.

"That is why we need to discuss everything, the current situation so that, first, nothing like this can ever happen again and, second, so that it does not damage the Russia-Turkey relations, which we and you too, I know, take very seriously and value", he noted.

President Recep Tayyip Erdogan has arrived in the Russian capital for a meeting with Vladimir Putin over the situation in Idlib, where the Turkish Army has in recent months been clashing with the Syrian military. The Turkish delegation also includes Foreign Minister Mevlut Cavusoglu, Defence Minister Hulusi Akar, and other high-ranking officials.

Ceasefire at Stake: Putin and Erdogan to Discuss Idlib Escalation in Moscow
Newsfeed
0
New firstOld first
loader
LIVE
Заголовок открываемого материала
Access to the chat has been blocked for violating the rules . You will be able to participate again through:∞. If you do not agree with the blocking, please use the feedback form
The discussion is closed. You can participate in the discussion within 24 hours after the publication of the article.
To participate in the discussion
log in or register
loader
Chats
Заголовок открываемого материала
Worldwide
InternationalEnglishEnglishMundoEspañolSpanish
Europe
DeutschlandDeutschGermanFranceFrançaisFrenchΕλλάδαΕλληνικάGreekItaliaItalianoItalianČeská republikaČeštinaCzechPolskaPolskiPolishСрбиjаСрпскиSerbianLatvijaLatviešuLatvianLietuvaLietuviųLithuanianMoldovaMoldoveneascăMoldavianБеларусьБеларускiBelarusian
Transcaucasia
ԱրմենիաՀայերենArmenianАҧсныАҧсышәалаAbkhazХуссар ИрыстонИронауОssetianსაქართველოქართულიGeorgianAzərbaycanАzərbaycancaAzerbaijani
Middle East
Sputnik عربيArabicArabicTürkiyeTürkçeTurkishSputnik ایرانPersianPersianSputnik افغانستانDariDari
Central Asia
ҚазақстанҚазақ тіліKazakhКыргызстанКыргызчаKyrgyzOʻzbekistonЎзбекчаUzbekТоҷикистонТоҷикӣTajik
East & Southeast Asia
Việt NamTiếng ViệtVietnamese日本日本語Japanese中国中文Chinese
South America
BrasilPortuguêsPortuguese