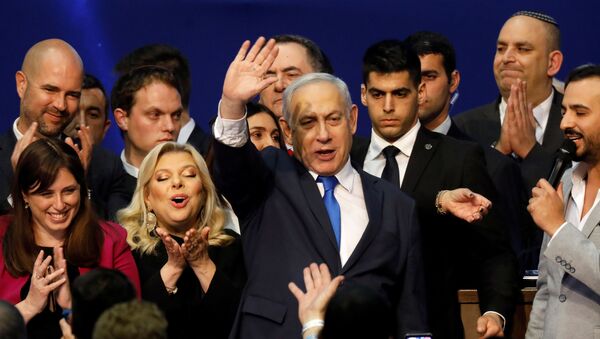 Tim Korso
All materialsWrite to the author
Israeli voters went to the polls on 2 March for the third time in less than a year to pick new members of the Knesset, but preliminary results so far indicate that another stalemate in efforts to form a government lies ahead.

The final results of the Israeli election are expected to be published sometime soon, but the preliminary results do not paint a pleasant picture for the political bloc led by Prime Minister Netanyahu and his Likud party. The bloc can count on 58 seats in the 120-seat Knesset after 99% of the votes have been processed, thus falling three seats short of securing a majority.

Ksenia Svetlova, a fellow at the Interdisciplinary Centre Herzliya and former Knesset member, says that the result of the 2 March vote is a "big victory for Netanyahu himself", whose party won more seats compared to the previous election, but it was not a victory for his bloc. While he came close to the "magic number 61", it was not close enough to actually secure his ability to form a solid government, the researcher says.

"Netanyahu already had 60 votes back one year ago, in April of the last year and he was not able to form a government, so nothing basically promises that he will be able to do this trick this time around. He was not able to convince MKs from the opposition parties to join him, and we don't know if it will happen this time", she said.

A senior research fellow and head of three security programmes at the Institute for National Security Studies in Tel Aviv, retired Brigadier General Meir Elran, still believes that there is a chance for Netanyahu's bloc to reach 61 seats, saying that whether or not his alliance manages to form a government heavily depends on if it can secure a majority. Elran adds that it's hard to predict what will happen if Netanyahu's bloc stops short of securing 61 seats.

Both researchers agree that building a government without a majority in the Knesset will be a difficult task for any political faction in Israel. Svetlova suggests that Netanyahu will try to convince some members of right-leaning parties, such as Kahol Lavan and Yisrael Beiteinu, or even MKs from the left-wing Meretz or Labour, to join him in his bid to form a coalition government, but she is sceptical of the chances that such an approach would work.

Svetlova notes that the chances of forming a unity government with these parties would be much higher if Netanyahu steps down from his leadership of Likud, even suggesting that Avigdor Lieberman, the founder and leader of the Yisrael Beiteinu party, might be willing to join a coalition once Netanyahu is out of the picture. 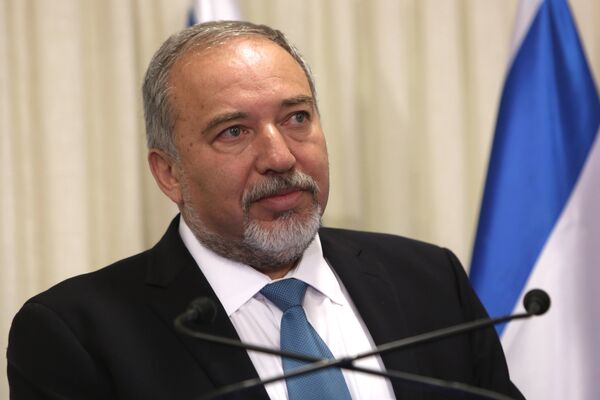 Avigdor Lieberman, the head of hardline nationalist party Yisrael Beitenu, is seen during a ceremony in which he signed a coalition agreement with the Israeli prime minister at the Knesset, the Israeli parliament in Jerusalem
© AFP 2021 / MENAHEM KAHANA

A so-called narrow coalition is also a possibility, with the Likud party already having suggested that the prime minister will look into such a possibility. Researcher Meir Elran thinks that a narrow coalition would not be stable enough for Netanyahu, but he currently sees no other option for him to avoid a fourth election. Both Elran and Svetlova agree that a third snap election is still an option for Israel.

Whether or not Netanyahu emerges victorious from the 2 March election will determine the future of some domestic and foreign policy issues, Ksenia Svetlova points out. On the domestic front, Netanyahu (as well as his wife) is facing criminal charges – he has been indicted for bribery, fraud, and breach of trust in two cases, although he denies having committed any misconduct. 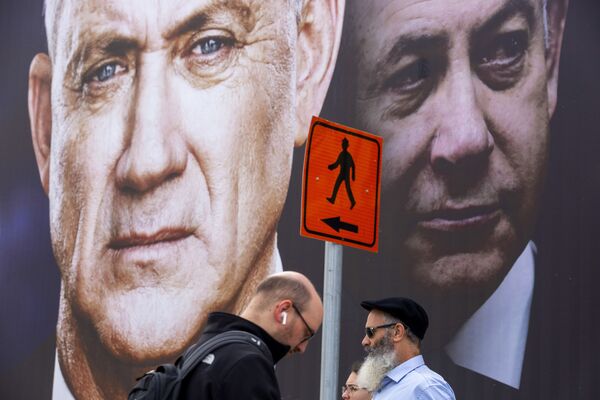 The researcher and former Knesset member suggests that if he is elected prime minister again, Netanyahu could use his position to end his prosecution one way or another. Namely, he could reshuffle some officials and even remove Attorney General Avichai Mandelblit, who indicted him, Svetlova says. She also explains that passing a bill that protects serving prime ministers from prosecution could also be a way for Netanyahu to protect himself, but is sceptical that it would pass in the Knesset.

"The only possibility for him not to stand trial is to have now the majority, to form a government and to pass the so-called French bill […] basically postponing trial for later. It's a very difficult move. He was not able to pass this bill during the 20th Knesset, there is no probability that he will be able to do it now", Svetlova said.

Another issue closely connected to the future Israeli prime minister is the fate of the Middle East peace plan proposed by US President Donald Trump this year. The plan was largely endorsed by Netanyahu, but was rejected by the Palestinian Authority, Hamas, and some other Middle East countries due to depriving the Palestinians of large swaths of land, while offering little in return.

Svetlova says that the plan will only survive in some form if Netanyahu is re-elected and would likely be buried by any other future prime minister. The researcher adds that even with Netanyahu, the peace plan's future is not bright.

"Since the Palestinian party is not willing to cooperate with the plan or with Netanyahu, it's doomed in any case. But if Netanyahu will somehow form the government, he will, of course, cooperate with Trump and the end of this plan can be, for example, annexation of some parts of Judea and Samaria by the Israeli government, but not peace. There will be a plan, but it will be a plan without a peace part", Svetlova concluded.