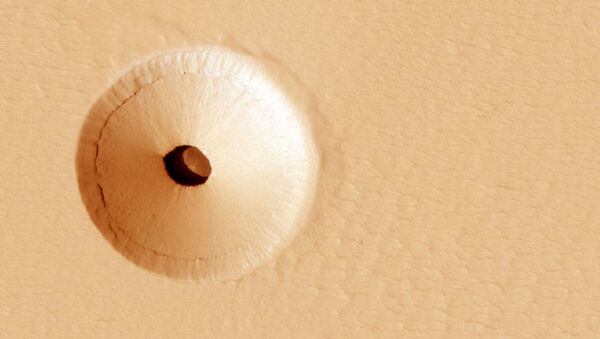 In 2011, an unusual hole on the side of Mars’ Pavonis Mons volcano was discovered by the Mars Reconnaissance Orbiter. Since then, scientists have been speculating about what the mysterious cavity could be hiding.

A photo of a mysterious hollowed-out mountain on Mars, which was published as the Astronomy Picture of the Day on NASA’s blog over the weekend, has raised new questions about the red planet’s secrets that the agency has still not been able to fully answer.

The hole, or “skylight”, allegedly appeared as a result of lava flows and is believed to be about 35 metres across. The opening leads to an underlying cavern, approximately 20 metres deep, according to the “interior shadow angle”. It is the interior of the cavern that is raising the most questions among scientists, who have even suggested that the tube cave could be a candidate for containing “Martian life”, as it remains relatively protected from Mars’ harsh surface.

“Why there is a circular crater surrounding this hole remains a topic of speculation, as is the full extent of the underlying cavern”, the blog’s authors and editors, Robert Nemiroff and Jerry Bonnell, suggested, commenting on the picture.

“These pits are therefore prime targets for possible future spacecraft, robots, and even human interplanetary explorers”, the scientists added.

Image: A Hole in Mars

What created this unusual hole in Mars? The hole was discovered by chance in 2011 on images of the dusty slopes of Mars' Pavonis Mons volcano taken by th... [Image Credit: NASA, JPL, U. Arizona]

It would seem more logical that life would be beneath the surface. I dont think they care for humans much.

The formation was first discovered in 2011 thanks to an accidental image taken by a special camera instrument on the Mars Reconnaissance Orbiter, which is currently orbiting Mars. However, the newly published pic is the first close-up colour image of the mysterious hole to be released.