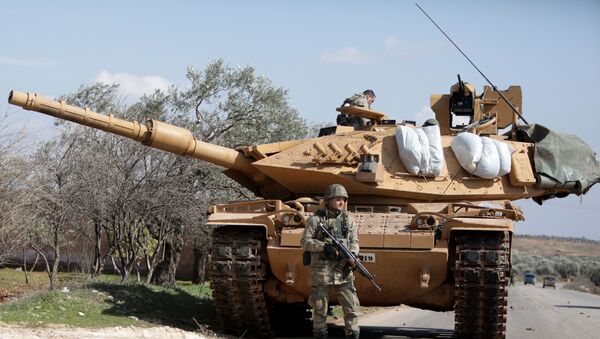 © AFP 2021 / BAKR ALKASEM
Subscribe
ANKARA (Sputnik) - One Turkish soldier was killed in an attack by Syrian government forces in Idlib province, while nine others were injured, the Turkish Defence Ministry said on Tuesday, adding that response fire followed.

"As a result of fire against our forces by the Syrian regime, in the area of Operation Spring Shield, one of our fellow soldiers was killed and nine were injured. Response fire on 82 regime targets, located in this area, continues", the Turkish Defence Ministry said in a statement.

Turkey launched its 'Operation Spring Shield' Thursday, with the offensive coming shortly after the deaths of dozens of Turkish troops during a Syrian army attack on terrorist positions. The Russian military later indicated that the troops were operating amongst Nusra* militants in the region, against whom Syrian troops have been carrying out an offensive since December.

Ankara ramped up operations in Idlib in early February after a Syrian strike targeting militants hit one of the dozen Turkish 'observation posts' in the province. The situation in the region has since turned into a shooting war between Syrian and Turkish forces, with Moscow seeking to negotiate a ceasefire. Putin and Erdogan are expected to meet in Moscow on Thursday to discuss the situation.

000000
Popular comments
That which is too good to be true usually is.