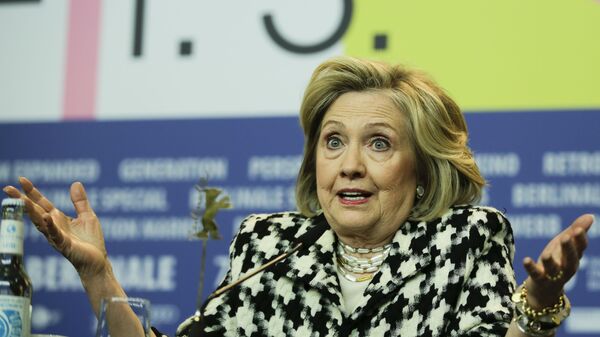 © AP Photo / Markus Schreiber
Subscribe
The almost six-year-long saga relates to Hillary Clinton’s use of a private email server for government business while secretary of state. Although the FBI investigation resulted in no charges, it still remains to be seen whether her unusual email practices were meant to avoid Freedom of Information Act requests.

A federal judge has ordered Hillary Clinton to provide a sworn deposition in person about her private email server.

The order, issued on Monday by US District Court Judge Royce Lamberth, grants the request of conservative watchdog Judicial Watch to depose Clinton about her correspondence and documents related to the 2012 attack on the US consulate in Benghazi, Libya.

The court also ordered the deposition of Clinton’s former chief of staff, Cheryl Mills, and two other State Department officials. It also allowed Judicial Watch to subpoena Google for documents and records associated with Clinton’s emails during her time at the State Department from 2009 to 2014.

Republican officials and members of Congress had accused then-Secretary of State Cinton of failing to prevent the attack, which left four Americans dead. She defended her handling of the episode.

Judicial Watch’s lawsuit seeking Benghazi-related records led to a scandal in 2015 when it helped discover that Clinton had repeatedly used her own private email server, rather than a government-issued one, during her time as Secretary of State. Records of official correspondence must be kept under federal law, and Clinton’s reliance on a private account sparked concerns that she was seeking to sidestep that requirement.

The email scandal haunted Clinton’s presidential campaign and was weaponised against her by then-Republican candidate Donald Trump.

The FBI concluded in July 2016 that she had been “extremely careless in their handling of very sensitive, highly classified information”. Although Clinton insisted that she had never received or sent classified material, the FBI discovered that she had send out over a hundred emails that should have been regarded as classified.

Around 30,000 emails, deemed to be work-related, were provided to the State Department; her aides had also deleted around 32,000 emails, which they claimed to be non-work related, before any subpoenas were issued.

The bureau, however, recommended bringing no criminal charges against Clinton and referred the case to the Justice Department, which closed it with no charges. The FBI reopened its probe just days before the November election after new emails were discovered.

“Judicial Watch argued that Secretary Clinton’s existing testimony has only scratched the surface of the inquiry into her motives for setting up and using a private server,” Judge Lamberth said in the 11-page ruling. “Secretary Clinton has repeatedly stated that convenience was the main reason for using a private server, but Judicial Watch justifiably seeks to explore that explanation further.”

Clinton previously explained her use of a private server in a sworn written statement, but this deposition would be the first time she had to answer questions on the case in person.

“To argue that the Court now has enough information to determine whether [the] State [Department] conducted an adequate search is preposterous,” Lamberth wrote. “Even years after the FBI investigation, the slow trickle of new emails has yet to be explained.”

He stressed that some of the questions remain to date: “How did she arrive at her belief that her private server emails would be preserved by normal State Department processes for email retention? ... Did she realise State was giving ‘no records’ responses to her FOIA requests for emails? ... And why did she think that using a private server to conduct State Department business was permissible under the law in the first place?”