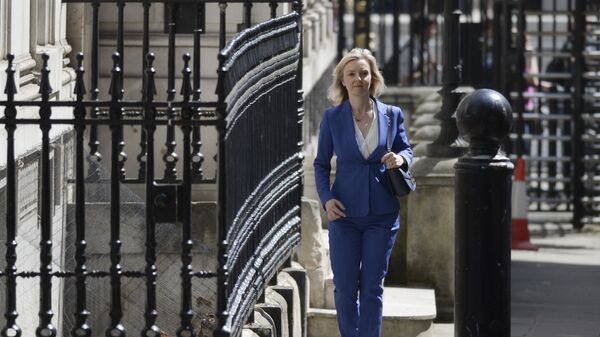 Oleg Burunov
All materialsWrite to the author
Earlier on Monday, Prime Minister Boris Johnson promised that the UK is “going to drive a hard bargain to boost British industry” when negotiating a free trade agreement with the US.

UK International Trade Secretary Liz Truss has signalled London's readiness to withdraw from trade talks with Washington if, as she said, "we don't get the deal we want."

She told reporters on Monday that the UK would "diminish" its food safety standards or put the issue of the National Health Service "on the table" during the bilateral trade negotiations.

The statement comes after Prime Minister Boris Johnson pledged earlier in the day that the UK will not “drive a hard bargain to boost British industry” when negotiating a free trade agreement with the US.

“Most importantly, this transatlantic trade deal will reflect the unique closeness of our two great nations”, Johnson said, claiming that the UK has “the best negotiators in the business”.

He voiced hope that when “trading Scottish smoked salmon for Stetson hats”, Britain will “deliver lower prices and more choice for our shoppers”.

Johnson was echoed by Truss, who earlier suggested that the deal with the UK’s “biggest single trading partner will cut red tape for our small businesses, cut tariffs for our great products from dairy to cars and increase growth in all four nations”.

Confederation of British Industry director general Carolyn Fairbairn, in turn, praised “the government's ambitions to make it easier for skilled people to move between the UK and US" and "support small business exporters".

Johnson’s statement came after the British government cited its analysis as predicting that the UK-US free trade deal may boost transatlantic trade by £15.3 billion ($19.61 billion), and add £3.4 billion ($4.3 billion) to the British economy, which is worth around $2.7 trillion.

The government also reiterated that the UK’s  National Health Service (NHS) was “not for sale”, amid concerns that the UK-US trade deal may enable private American healthcare providers into Britain’s state-funded health system.

Back in June 2019, US President Donald Trump announced that he and then-newly appointed British Prime Minister Boris Johnson are already working on a bilateral free trade agreement.

And I think it’ll be a very substantial trade agreement, you know we can do with the UK, we can do three to four times, we were actually impeded by their relationship with the European Union,” Trump pointed out.