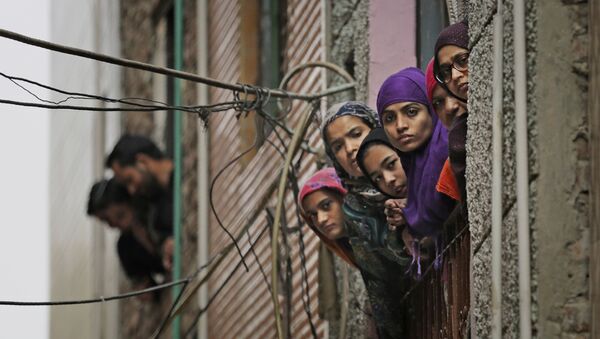 © AP Photo / Altaf Qadri
Subscribe
New Delhi (Sputnik): Panic gripped Delhites again on Sunday evening when rumours of fresh violence started making the rounds. India’s national capital is still coming out of the shock of communal violence which rocked the northeast district of the city on 24 and 25 February.

As many as 1,900 distress calls were made to Delhi Police due to panic which gripped many people in the riot-hit city on Sunday evening. The calls were received from West Delhi, where people had shut down their shops and markets in the evening following rumours of fresh violence, police have revealed.

Besides the Police Control Room (PCR) calls, several people from within Delhi as well as from outside called police officials directly to verify information about fresh violence, said a senior police official on Monday.

Following the rumours, Delhi Police senior officials remained on their toes on Sunday night, and as many as 40 people were arrested. Delhi Police assured residents by tweeting that the reports of violence were just rumours.

@LtGovDelhi @CPDelhi @DelhiPolice
Concerted efforts were made over the evening by mischievous and anti-social elements to create panic in Delhi by spreading false rumours of rioting over various social media platforms.

In truth, there was nothing..

​According to a senior police official, emergency calls numbers 112 and 100 received 481 calls from the city's West District followed by the Southeast District which received 413 calls following the rumours.

Police have arrested 21 people for spreading rumours under Section 7/51 of Criminal Code of Procedure (CrPC).

The communal violence in Delhi’s northeast district has claimed 45 lives, while around 300 have sustained injuries and several others are still missing. Authorities are claiming that the situation is now back to normal but isolated incidents of violence are still coming to the fore in areas such as Shiv Vihar, Chandbagh, Maujpur, and Gokulpuri.

The violence occurred when anti and pro-citizenship law protesters clashed last week. The law grants citizenship to persecuted non-Muslim religious minorities from Pakistan, Afghanistan, and Bangladesh. The central government has clarified that the amended law does not affect any Indian national and rather it grants citizenship to illegal immigrants who arrived in India on or before 31 December, 2014

Many Muslims in India fear that the law targets them and is a plot to strip them of their Indian citizenship.