A Little Help From Their Friends: How Vietnam Withstood Largest Bombing Campaign in Human History 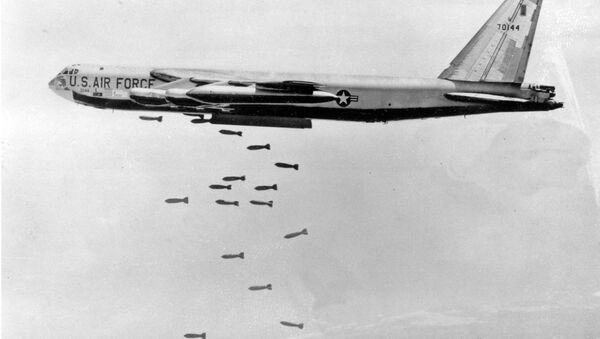 © AP Photo / Associated Press
Subscribe
Ilya Tsukanov
All materialsWrite to the author
Between 1965 the 1975, the United States Air Force dropped over three times more bombs on the Southeast Asian nations of Vietnam, Laos and Cambodia than the total tonnage dropped by the Allies during World War II.

Monday marks the 55th anniversary of the start of Operation Rolling Thunder, the US Air Force bombing campaign against North Vietnam which remains the largest sustained aerial bombing campaign in human history.

What was meant to be an eight week operation ended up lasting 44 months, until October 31, 1968. During the campaign, US aircraft carried out some 304,000 sorties over North Vietnam, dropping about a million tonnes of munitions, or an average of some 800 tonnes a day. Over six million more tonnes of bombs would be dropped elsewhere in Indochina by the time the US would withdraw from the region in 1975. By comparison, Allied planes dropped a total of ‘only’ 3.4 million tonnes of bombs on the Axis powers between 1939 and 1945.

Col. Igor Permyakov, the head of the Central Archives of the Russian Defence Ministry, suggests that Operation Rolling Thunder’s real goal was “really an attempt to essentially destroy North Vietnam.” At the same time, he said, the North Vietnamese were able to avoid catastrophic losses thanks to an elaborate network of shelters and communications.

“Of course, without the help of the Soviet Union, Vietnam would not have been able to withstand this aggression,” Permyakov emphasized. “Moscow supplied the country with a large number of modern anti-aircraft missile systems and radars. These systems were effectively controlled by Soviet specialists. They inflicted major losses on US aviation. The Americans lost a total of 938 aircraft and 1,084 pilots killed, captured or missing. This helped lead to massive protests inside the US itself and ultimately forced the US government to stop the operation.” 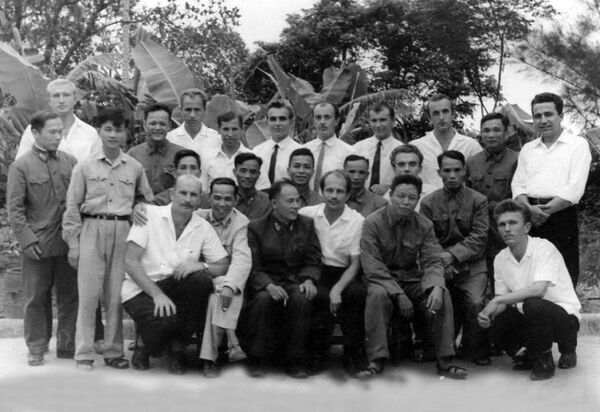 A group of Soviet military experts assigned to the 368th surface to air-missile regiment of the People's Army of Vietnam
© Photo : An exhibtiion of photos taken during the Vietnam War

Indeed, if in the early stages of the war, the North Vietnamese seemed almost defenseless against the high altitude US air operations, the clandestine shipment of advanced air defences by the Soviets to the country gradually shifted the balance, forcing the Pentagon to change tack. Specifically, once Moscow delivered the S-75 Dvina high-attitude air defence system to North Vietnam, US B-52 Stratofortress strategic bombers were no longer safe high above the clouds, and forced to descend below altitudes of 3 km, putting them at risk of other Vietnamese air defences, including traditional anti-aircraft batteries. Vietnam had assembled large quantities of these weapons going back to the Second World War and their fight against Japan, and from their 1950s campaign against the French. 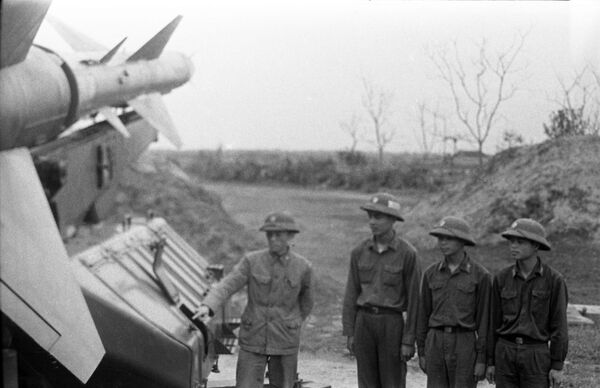 Two years into Operation Rolling Thunder, North Vietnam amassed as many as 150 surface-to-air missile launchers organized into 25 battalions, along with over 200 radar early warning sites dotting the whole country, which not only helped warn of impending US raids, but coordinated the country’s air defence network. By 1967, not one square inch of North Vietnam was left undefended. Furthermore, as in Korea a decade and a half earlier, Hanoi was armed with MiG-17 and the new MiG-21s fighters by Moscow. Used in combined operations to carry out hit and run attacks, these aircraft turned into a serious challenge not only to B-52s, but also to the faster F-105 Thunderchief fighter-bombers and F-4 Phantoms which could accompany them. During Operation Rolling Thunder, Vietnamese pilots carried out a total of 268 major air battles, during which they claimed the destruction of over 240 US and allied planes, while losing 85 MiGs.

All told, between 1965 and 1975, in their operations in North Vietnam, South Vietnam, Laos and Cambodia, the US Air Force lost some 2,251 aircraft, including 31 B-52s, 445 Phantom IIs, 243 Super Sabres, and 382 Thunderchiefs, among others. The US Navy, meanwhile, lost 532 more fixed wing aircraft. US helicopter losses were even more serious, reaching over 5,100 choppers lost by the end of the war. 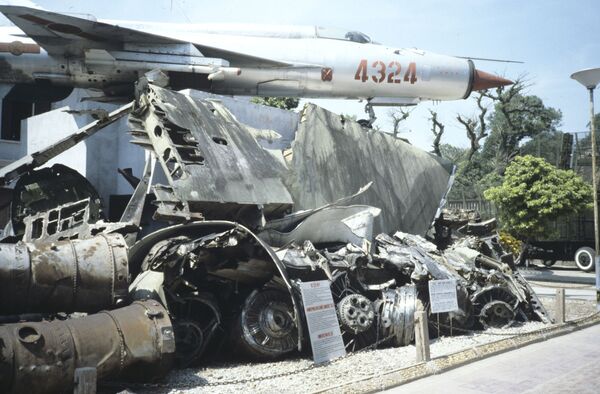 A MiG-21 on display alongside the remains of B-52 bombers at the Vietnam Military History Museum in central Hanoi.
© Sputnik / Е. Ленг
/
Go to the photo bank

Notwithstanding these air victories, which ultimately helped force the US to admit defeat in Southeast Asia, the strategic bombing campaign had a devastating toll on Vietnam and its neighbours. As many as 182,000 North Vietnamese civilians killed during Operation Rolling Thunder. Furthermore, the Pentagon’s use of Agent Orange would lead to the deforestation of about 18 percent of Vietnam’s entire forested area. To this day, Vietnamese farmers continue to find unexploded US ordnance, while hundreds of thousands of Vietnamese and thousands of US veterans have faced cancers, birth defects in children, and other diseases associated with exposure to the chemicals. Unfortunately, while US vets have been made eligible for compensation for their injuries, Vietnam has yet to be compensated in any way. 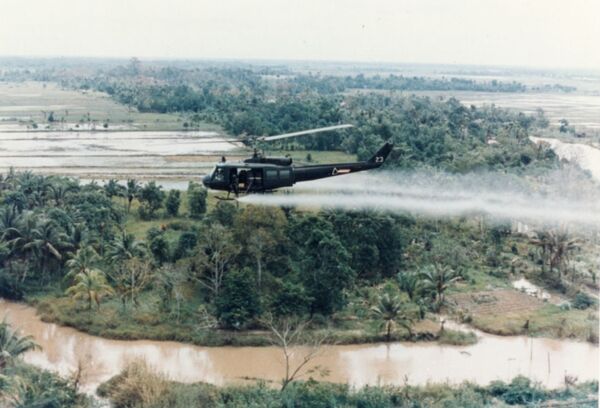 US Army helicopter sprays Agent Orange over Vietnamese fields.
© Public Domain
000000
Popular comments
My first instinct is to feel angry at the Soviets for doing this but then the rational person inside just asks, why were we there to begin with? We had no right or duty to go kill those people. We had no business there. And now, even if it helps the crude oil flow, I feel we still have no business in the middle east. I hope this ends some day. My kids have never lived in an America that was not at war with someone. This is sickening.
jimmy8899
2 March 2020, 17:05 GMT5
000000
I was drafted during Viet Nam and thought to myself, how could I go to another country and kill a man I don't even know? He has a mom and dad, maybe some brothers and sisters or even a wife and child like me. How could I ever hate him enough to kill him? Lucky I didn't go, they sent me stateside.
parkerjoe
2 March 2020, 17:46 GMT11
000000
Newsfeed
0
New firstOld first
loader
LIVE
Заголовок открываемого материала
Access to the chat has been blocked for violating the rules . You will be able to participate again through:∞. If you do not agree with the blocking, please use the feedback form
The discussion is closed. You can participate in the discussion within 24 hours after the publication of the article.
To participate in the discussion
log in or register
loader
Chats
Заголовок открываемого материала
Worldwide
InternationalEnglishEnglishMundoEspañolSpanish
Europe
DeutschlandDeutschGermanFranceFrançaisFrenchΕλλάδαΕλληνικάGreekItaliaItalianoItalianČeská republikaČeštinaCzechPolskaPolskiPolishСрбиjаСрпскиSerbianLatvijaLatviešuLatvianLietuvaLietuviųLithuanianMoldovaMoldoveneascăMoldavianБеларусьБеларускiBelarusian
Transcaucasia
ԱրմենիաՀայերենArmenianАҧсныАҧсышәалаAbkhazХуссар ИрыстонИронауОssetianსაქართველოქართულიGeorgianAzərbaycanАzərbaycancaAzerbaijani
Middle East
Sputnik عربيArabicArabicTürkiyeTürkçeTurkishSputnik ایرانPersianPersianSputnik افغانستانDariDari
Central Asia
ҚазақстанҚазақ тіліKazakhКыргызстанКыргызчаKyrgyzOʻzbekistonЎзбекчаUzbekТоҷикистонТоҷикӣTajik
East & Southeast Asia
Việt NamTiếng ViệtVietnamese日本日本語Japanese中国中文Chinese
South America
BrasilPortuguêsPortuguese
NewsfeedBreaking
05:42 GMTFrance Snubs BoJo Offer of Joint Calais Patrols, Tells UK to Focus on ‘Legal Immigration Paths’
05:31 GMTCOVID-19 Live Updates: Malaysia Detects First Case of Omicron Variant
05:29 GMTISS to Perform Avoidance Maneuver Against Space Debris on Friday
05:23 GMT37 Years After Bhopal Gas Tragedy, New Series ‘The Railway Men’ to Pay Tribute to the Unsung Heroes
05:23 GMTAmerica's Epidemic: The US’s Massive Mass Shooting Problem
04:10 GMTUS Midterms 2022: Democrats Fear Congressional Shakeup as 19 House Dems Will Not Seek Reelection
04:04 GMT'I Knows It's Not Me': Alec Baldwin Says He's Not to Blame for Fatal 'Rust' Shooting
02:17 GMTThe Harris Shuffle
01:26 GMTUS Government Actions Urgently Needed to Better Protect Critical Infrastructure - Report
00:52 GMTIranian Scientists Recruited by Israel’s Mossad Behind Explosions at Natanz Nuclear Plant - Report
YesterdayUS, EU Diplomats Emphasize Need to Cooperate With China Where Possible - Joint Statement
YesterdayUS Signs $415Mln Deals With 3 Companies to Design Commercial Space Stations - NASA
YesterdayBiden Admin Finalizes Plan to Reinstate Trump-Era 'Remain in Mexico' Policy at Southern Border
YesterdayManchester United's Michael Carrick Steps Down as First Team Coach
YesterdayUS Congress Passes Spending Bill to Stave Off Government Shutdown, Measure Heads to Biden
YesterdayWall Street Rebounds as Heat Fades on Omicron, Dow Jones Up Almost 2%
YesterdayFTC Sues to Block $40 Billon Merger of US Chipmaker Nvidia With UK’s Arm Ltd
YesterdayCristiano Ronaldo Scores 800th Goal for Club and Country
YesterdayGunman at UN Headquarters Not Terrorist Threat, Came to Deliver Documents - Police
YesterdayRussian Prosecutors Launch Probe Into Whelan's Complaints of Prison Corruption - Brother