Iranian Foreign Ministry: US ‘Has No Legal Position’ to Ink Peace Agreement With Taliban 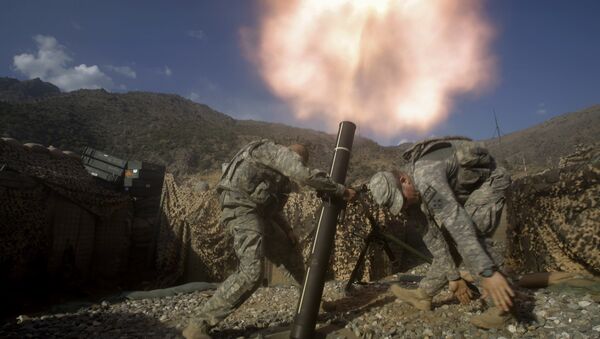 © AP Photo / David Guttenfelder
Subscribe
On Saturday, the US and the Taliban clinched a landmark peace agreement in Doha, which stipulates the complete withdrawal of US and NATO forces from Afghanistan over a 14 month period, including cutting troop numbers to 8,600 within 135 days.

The Iranian Foreign Ministry said in a statement on Sunday that the US “has no legal position to sign a peace deal [with the Taliban] or to decide the future situation of Afghanistan”.

The Ministry underscored that they welcome “any development that would contribute to peace and stability” in the South Asian country, but that it can only be achieved through domestic talks and by heeding “the considerations of Afghanistan’s neighbouring countries”.

Iran “believes the presence of foreign forces in Afghanistan is illegal and is one of the key contributors to war and insecurity in the country”, the Ministry pointed out, adding that they consider the US’ moves “an effort to legitimise” the deployment of its troops in the South Asian nation.

The statement came after former National Security Adviser John Bolton asserted on his Twitter page that the US-Taliban peace deal poses an “unacceptable risk to America’s civilian population”, slamming the document as “an Obama-style deal”.

“Legitimising Taliban sends the wrong signal to ISIS [Daesh*] and al-Qaeda* terrorists, and to America's enemies generally”, he tweeted on Saturday.

President Donald Trump in turn hailed the agreement later on Saturday, pledging that he would personally meet with Taliban leaders “in the not so distant future”. 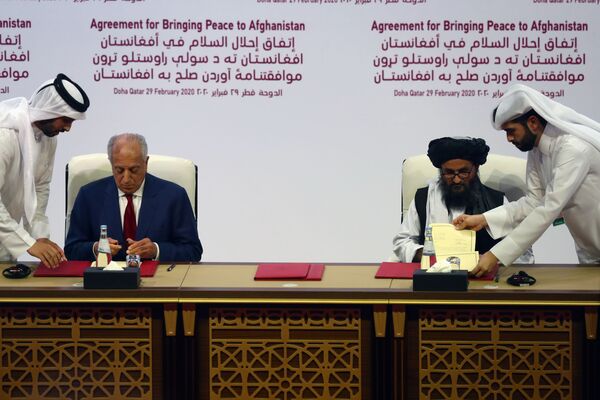 Mullah Abdul Ghani Baradar, the leader of the Taliban delegation, signs an agreement with Zalmay Khalilzad, U.S. envoy for peace in Afghanistan, at a signing agreement ceremony between members of Afghanistan's Taliban and the U.S. in Doha, Qatar February 29, 2020.
© REUTERS / IBRAHEEM AL OMARI

He also called on neighbouring countries to help maintain stability in Afghanistan, following an agreement which suggests a full withdrawal of all foreign troops from the nation, including US forces. Responding to Bolton’s criticism, POTUS recalled that the former National Security Adviser had “had his chance” in Afghanistan, which he had never used.

“He was here for a year. He could have done something better - I was all ears, and he wasn't able to do that,” Trump said.

He spoke after the long-awaited US-Taliban peace accord was inked in the Qatari capital Doha earlier on Saturday.

In line with the deal, Washington promised “to reduce the number of US military forces in Afghanistan to 8,600 and implement other commitments in the US-Taliban agreement within 135 days of the announcement of this joint declaration and the US-Taliban deal”, according to a joint statement issued shortly before the signing of the accord.

Up to 5000 Taliban prisoners will be released from prisons by 10 March, the first day of intra-Afghan talks, while the remaining prisoners will be freed within the next three months, according to the agreement.

The Taliban in turn is obliged to keep such terrorist groups as al-Qaeda from using Afghan soil to threaten the security of the US and its allies.

*Daesh (ISIL/ISIS/Islamic State), al-Qaeda, terrorist groups banned in Russia and many other countries

000000
Popular comments
USA signature means nothing. See how many (more of 100) signatures were signed with the American Indians so the Indians could be guarantee a piece of fertile land. The results of these signatures were void after few months later. Fake promises is the historical pattern of the USA since the 16th century.