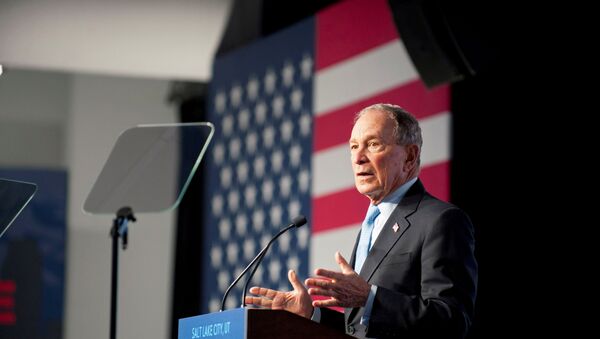 Oleg Burunov
All materialsWrite to the author
Donald Trump has repeatedly quipped at Michael Bloomberg's stature, claiming that the Democratic presidential hopeful stands on a box behind the podium when speaking, allegations that are rejected by Bloomberg's team.

Addressing his supporters at the Conservative Political Action Conference (CPAC) in Maryland on Saturday, Trump crouched behind a podium as he mimicked Bloomberg’s performance at a debate in Las Vegas last week.

Pres. Trump mocks Mike Bloomberg by bending down at the podium to make fun of his height: pic.twitter.com/sfVSLh9WCl

“She was really mean to Mini Mike. The way she treated him, he didn’t know what hit him”, Trump said referring to another Democratic presidential hopeful, Elizabeth Warren, issuing stern remarks against Bloomberg at the time.

Like him or not, this man is a comedian

“He’s going, ‘Oh get me off this stage, get me off’. It’s true. It’s true”, Trump went on as he shrank behind the podium, prompting laughter and applause from the audience and then adding, “We hit a nerve there, huh?”

During the Las Vegas debate, Warren in turn said that she would like to talk about “who we’re running against, a billionaire who calls women ‘fat broads’ and ‘horse-faced lesbians’”.

Trump has long made fun of Bloomberg’s height, going as far as claiming last month that the 78-year-old’s stature is ostensibly 5 feet and 4 inches, or 164 centimetres.

Bloomberg deserves to be mocked and I’m sorry this was hysterical!!! 🤣😂🤣😂🤣😂🎉

“Mini Mike is a 5’4” mass of dead energy who does not want to be on the debate stage with these professional politicians. No boxes please”, Trump tweeted in mid-February.

Bloomberg launched a bid for the 2020 Democratic presidential nomination in November 2019, pointing out that he is “running for president to defeat Donald Trump and rebuild America”.

“We cannot afford four more years of President Trump’s reckless and unethical actions. He represents an existential threat to our country and our values. If he wins another term in office, we may never recover from the damage”, he added.