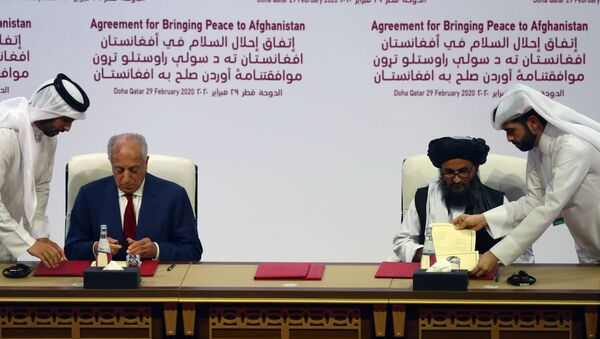 The negotiators from the United States and the Taliban are meeting in Doha, Qatar to sign an accord that envisages the timetable of the US withdrawing some of its 13,000 troops. The Taliban, in turn, is expected to sever ties with all extremist groups and prevent the territories of Afghanistan from becoming havens for militants.

The United States and the Taliban movement have signed the long-awaited peace agreement in the Qatari capital of Doha on Saturday.

The US pledges to seek economic cooperation for reconstruction with the new post-settlement Afghan Islamic government and will not intervene in its internal affairs.

In return, the Taliban will take steps to prevent terrorist groups, such as al-Qaeda*, from using Afghan soil to threaten the security of the US and its allies.

They include sending a "clear message" that those posing such threat have no place in Afghanistan. The Taliban will instruct its members not to cooperate with such groups or individuals and prevent them from recruiting and fund-raising. It will only grant asylum to people who do not pose a security threat and will not issue visas or other documents to those considered a risk.

Following the signature of the deal, US State Secretary Mike Pompeo enumerated key conditions of the deal between the United States and the Taliban.

"Keep your promises, cut ties with Al-Qaeda*. Keep up the fight against Daesh*," Pompeo said, addressing the Taliban.

He added that the agreement was "a true test," stressing that Washington will calibrate the pace of the troop withdrawal with the actions of the Taliban.

US President Donald Trump, for his part, welcomed the agreement as a move to put an end to the US most protracted war.

"We are working to finally end America’s longest war and bring our troops back home," he said.

The head of the militant group's political office in Qatar said that the Taliban will adhere to the peace agreement signed in Doha on Saturday.

"The US and the Taliban movement have successfully concluded talks in Qatar. I congratulate everyone on this achievement. We will comply with the pact and, as a political force, we want it to be implemented by neighbouring countries," Abdul Ghani Baradar said.

In his turn, Afghan President Ashraf Ghani expressed hope that the long-awaited US-Taliban peace agreement would lead to a permanent ceasefire that in turn would bring stability to Afghanistan.

International Reactions to Historic Accord

NATO Secretary-General Jens Stoltenberg has said that the alliance supports the signing of the US-Taliban peace deal.

The European Union has welcomed the long-awaited peace deal between the United States and the Taliban as a first step toward a negotiated peace process among all Afghans.

"The European Union considers today’s conclusion of the Afghanistan-US Joint Statement for Peace and the settlement between the US and the Taliban as important first steps towards a comprehensive peace process, with intra-Afghan negotiations at its core," the declaration read.

It urged the sides not to miss this opportunity for a lasting peace that could create an environment of security and stability in the war-torn country. Keeping up the reduction in violence is an important part of that process, it added.

"The EU calls on all stakeholders to put the interests of the nation above all other considerations, as the collective responsibility of all Afghan political forces," it concluded.

The UN Assistance Mission in Afghanistan (UNAMA) has called for the continuation of the reduced violence in Afghanistan and welcomed the commitment of the conflicting sides to further dialogue.

The United Nations also expressed its support to an inclusive Afghan-led process and called for concrete steps toward ending the war.

"The United Nations stresses the importance of continuing to reduce violence, especially violence that harms civilians, and urges all parties, in the period ahead, to redouble efforts to reduce violence on the way to a permanent ceasefire and a lasting political settlement," the statement said.