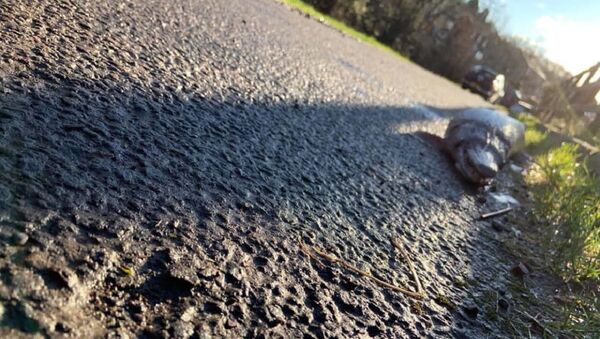 © Photo : Claire Martin/facebook
Subscribe
The Royal Society for the Prevention of Cruelty to Animals said it will conduct an investigation in order to find out how the animal ended up thrown out on the street. “This [encounter] is likely to have been a distressing for a member of the public to make”, RSPCA’s spokesman said

A mysterious half-fish, half-crocodile was discovered on a road in the Welsh town of Risca. A woman, who wished to remain anonymous, told the Daily Star her son stumbled upon the eerie sea monster on the way to school and phoned her. “It looks like it's been put there or something. It was definitely real, it was smelling and starting to rot”, the boy said.

Photos uploaded on social media sparked debate among social media users. While some said that the mysterious creature is was a pike, others thought that it was an alligator gar, which is found in North America. They can grow up to 6 ft (182 centimeters) and weigh over 100 lbs (45 kilograms). Other users, however, said that the spooky creature does not look like a pike or an alligator gar.
A spokesman for the Welsh division of the Royal Society for the Prevention of Cruelty to Animals (RSPCA) urged members of the public to contact the organisation if they know of the circumstances behind this animal being dumped on the street. RSPCA apparently thinks that the creature is an alligator gar as in its statement RSPCA said that there have been instances when exotic animals kept at home were thrown into the street when it became impossible meet their needs.

"There have been restrictions on the keeping of Alligator Gar fish in Wales for a number of years, and these would be very difficult animals to keep successfully as they can grow to be very large and their needs are the same as they would be in the wild", the RSPCA’s spokesman said in a statement.