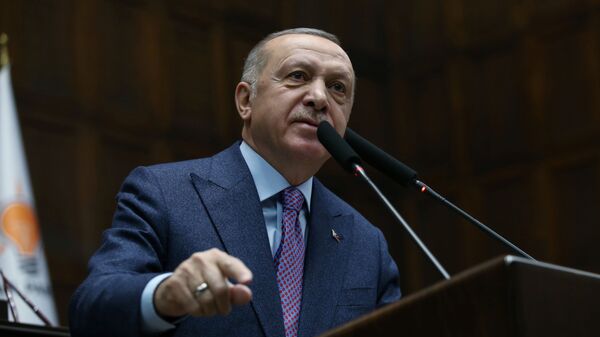 "We have three martyrs, let them rest in peace. But on the other hand, the regime's losses are very big", Erdogan said.

According to Erdogan, Turkey's Air Force is operating in Idlib in accordance with the Turkish-Syrian agreement concluded in Adana in 1998.

The Russian Foreign Ministry has said that Russian-Turkish negotiations on Idlib will continue in Ankara later in the day. According to the ministry, one of the reasons for the exacerbation of the situation in Syria lies in the failure to commit to Russian-Turkish agreements. The ministry also believes that there is no need to invite France and Germany to join Russia-Turkey talks on Syria's Idlib.

Erdogan said earlier that Turkey had not yet reached a satisfactory result in negotiations with Russia. The Turkish leader also said that he had called on Russian President Vladimir Putin to exert pressure on Assad to stop the offensive in Idlib and stay away from Turkish observation posts.

Earlier in February, Russian Foreign Minister Sergei Lavrov said that Turkey had not fulfilled several key commitments on Idlib, including its failure to distinguish between the armed opposition, which is ready for dialogue with the government within the framework of the political process, and terrorists. In turn, Turkish Vice President Fuat Oktay claimed that Ankara has fulfilled its obligations in Idlib.