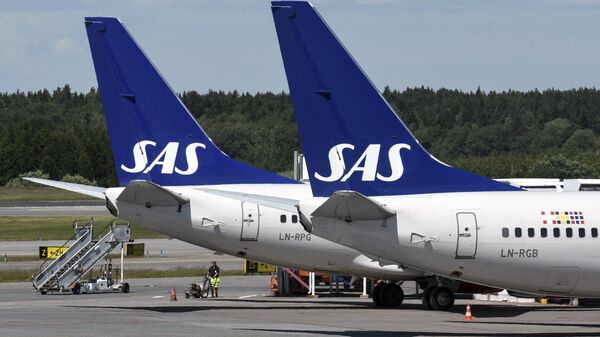 © AFP 2022 / Johan NILSSON / TT News Agency
Subscribe
Earlier in February, Scandinavia's largest airline enraged many customers with its overtly globalist ad claiming that there is no such thing as being Scandinavian and that all of Scandinavia's inventions or cultural expressions commonly associated with the region were “copied” from elsewhere.

The plunge was preceded by an interim report covering the period from November to January, to which the stock exchange reacted very negatively. The report showed that the company lost SEK 1.1 billion ($110 million) before tax, more than half a billion more than in the same period a year earlier.

SAS CEO Rickard Gustafsson is unhappy with the numbers, but argued that the result was fully expected.

“It is clear that this is nothing we wish for or think is satisfactory. But that is in line with what we have guided. And the deviation from the previous year is easily explained by two items. One is a weak exchange rate development, not least the Swedish krona against the dollar. And the fact that we have adopted a new accounting standard also affects the result”, Rickard Gustafson said.

Jacob Pedersen, aviation analyst at Danish Sydbank, ascribed the plunge to the market being worried about the spread of the deadly coronavirus.

“This is primarily due to concerns about the coronavirus, and its repercussions for air traffic in Europe. People are nervous about the many large expenses and costs they entail for airlines if parts of Europe's airspace are shut down due to the coronavirus”, Pedersen said.

So far, SAS has halted all flights to Beijing and Shanghai until the end of March as a result of the coronavirus outbreak. It is estimated that the stoppage alone will cost the company about SEK 200 million ($20 million). The aforementioned report also suggested that the virus may further hamper revenues. Nevertheless, the company's leadership called the current situation “manageable”.

Another factor that may have contributed to SAS's losses is an overtly globalist and multiculturalist advertisement campaign released earlier in February. The strongly pro-immigration ad by the state-owned Scandinavian flagship carrier claimed that there is no such thing as being Scandinavian and that all of Scandinavia's inventions or cultural expressions commonly associated with the region were “copied” from elsewhere.

The ad triggered an outcry of indignation across Scandianavia, from politicians, bloggers, and ordinary people alike, with individuals pledging to boycott the “self-hating” company from now on.

Not a good day for the marketing department at SAS. They pulled this video from YouTube and their Facebook comment section is flooded. Lex #gowokegobroke pic.twitter.com/PRrFI9ZSMD

​Following the outcry and after being rated on YouTube, SAS panicked and pulled the ad, only to release a slightly re-worked version of it. The company itself later suggested its campaign was attacked. Numerous Swedish media outlets blamed the “Russian trace” because Russian media such as Sputnik and RT reported on SAS's belly flop of an ad.