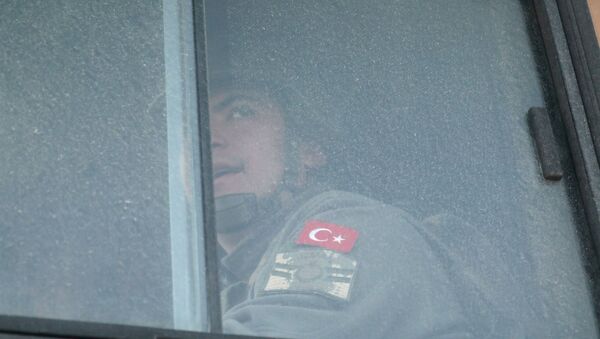 Live Updates: Russian Air Forces Did Not Carry Out Strikes in Area Where Turkish Servicemen Were Hit

The situation in the province escalated further after Turkish President Erdogan claimed that the developments in Idlib were unfolding in Turkey's favour, despite the deaths of three Turkish soldiers.

Some 33 Turkish soldiers have been killed as a result of an airstrike in the Syrian province of Idlib, Rahmi Dogan, the governor of the Hatay province, located close to the Turkish border with Syria, said.

Initially, Dogan said that the airstrike killed nine, adding that the injured were transported to Turkey.

The northwestern province of Syria has been tense since early February, as local militants intensified attacks against Syrian government forces. The Russian military has revealed that Ankara backed the militants in the area with artillery fire.

"We have not received any official request from the government to pass a document that would give it the right to declare war against Syria if necessary", lawmaker Erdogan Toprak from the Republican People's Party stated.

He also noted that the extraordinary session called for Saturday is intended to look into the circumstances surrounding the death of 33 Turkish soldiers in Idlib.

"During this session, we plan to discuss the situation in Syria's Idlib and request clarification from the government regarding the attack which targeted Turkish troops and the forces that carried it out".

"I would like to state that there were no armed groups around our troops during this attack", Turkish Minister of Defence Hulusi Akar said in a tweet.

Today, the #NATO Council meets at Turkey’s request to consult under Article 4 of NATO’s founding Washington Treaty on the situation in Syria: https://t.co/mwiEZfNGE3

The Russian Centre for Syrian Reconciliation was constantly receiving updates from Turkey on the exact location of Turkish troops deployed to terrorists' combat areas.

Despite this, when Syrian government troops responded to the attack, Turkish soldiers, who were among the Hayat Tahrir al-Sham* members, came under fire in the area around the settlement of Behun, the Russian Defence Ministry said, adding that, according to the information provided by Turkey, no units of the Turkish Army were present or could be present there.

Upon learning that Turkish soldiers sustained injuries, Russia took the necessary steps to urge Syrian forces to cease fire. Turkish officers who were killed or injured in Idlib were later evacuated safely to their country.

"Russian Aerospace Forces have not used aviation in the area of Behun", the official statement said.

"I hope that president Erdogan will see that we are the ally of their past and their future. And they need to drop the S-400", said Kay Bailey Hutchison, US Ambassador to NATO.

"The Secretary-General reiterates his call for an immediate ceasefire and expresses particular concern about the risk to civilians from escalating military actions. Without urgent action, the risk of even greater escalation grows by the hour", the UN spokesperson said.

"We stand by our NATO Ally Turkey and continue to call for an immediate end to this despicable offensive by the Assad regime, Russia, and Iranian-backed forces", a State Department representative said.

The Turkish army has destroyed a military convoy belonging to the Syrian government forces in eastern Idlib, the Sabah newspaper reported, citing an unnamed source.

"The consultation process with NATO is starting tomorrow. We expect concrete steps from NATO", Celik said.

"Seven people of those seriously injured have died, so the number of our dead soldiers increased to 29. A total of 36 soldiers were wounded, their treatment continues", Dogan said on the NTV television channel.

Tweet: "We draw the attention of our colleagues by pointing out that in some publications, especially on social media, the situation is a 'national issue' about martyrdom, based on informal preliminary news from Syria".

"The blood of our hero soldiers will not be left on the ground. Our ongoing activities in the Syrian field will continue until the hands extended to our flag are broken", said Turkish presidency communications director Fahrettin Altun.

He also called on the international community, the Astana-model participants in the first place, to fulfill their responsibilities.

"It is decided to respond to the illegitimate regime [of Syria] in the same way that it is aimed at our soldiers. With our air and ground fire support elements, all known targets of the regime have been fired upon. We call on the Astana Process to fulfill its responsibility, especially the parties, and the international community".

"Our minister had a telephone conversation with NATO Secretary-General Jens Stoltenberg", the Turkish Foreign Ministry said in a statement.

"In violation of the Sochi accords, the Turkish side continues to support the actions of illegal armed groups in the Idlib de-escalation zone by artillery fire and the use of reconnaissance and strike drones in attacks on the units of the Syrian armed forces", the head of the Russian center for Syrian reconciliation, Rear Admiral Oleg Zhuravlev said on Thursday.