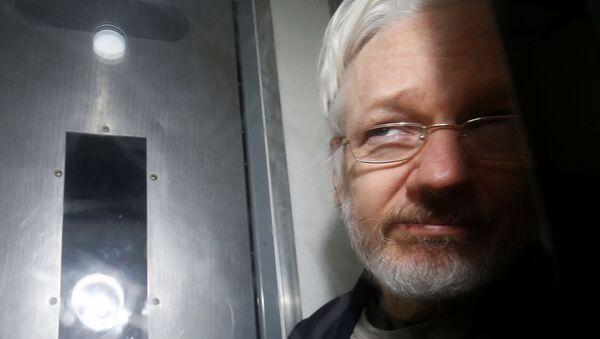 The first part of the hearing on the extradition of the WikiLeaks founder to the United States, held this week, is expected to end on Friday, and the second one is scheduled for May.

The fourth day of hearings in Julian Assange's extradition is being held on Thursday at the Woolwich Crown Court. According to American law, he is facing 175 years of prison over the 2010 leak of classified materials linked to alleged US war crimes during military campaigns in Afghanistan and Iraq.

The Australian was arrested in April 2019 after spending seven years in asylum at the Ecuadorian Embassy. He stressed that another case against him, which caused the arrest was just a pretext to send him to the US.

Table of contents
Judge Rejects Application to Permit Assange to Sit With Lawyers During May Hearings
Extraditing Assange is Bullying Masquerading as Justice - Former Correspondent for the Guardian
International Observatory of Human Rights Calls on London Not to Extradite Assange to US
'You Can't Have Your Cake and Eat it Too' - Editor-in-Chief of WikiLeaks on Arguments of Prosecution
'If a 3-Week Hearing Becomes a 6-Week Hearing, So Be It' - Judge
Info Passed to Assange's Defence Team to Allow Julian Access to Lawyers
Court Adjourns Until 2 pm GMT - Courage Foundation
Describing Something Recognised in UN Model Treaty as 'Outdated' is Funny - Defence
Assange's Case not Analogous to Political Refugee Cases - Prosecutor
Assange's Defence Says Extradition Treaty Does Not Rely on Extradition Act 2003 as Hearing Resumes
Court Takes Recess As Assange Defence Team Prepares Response to US Arguments
US Gov't Claims it Doesn't Matter if Alleged Offences Are 'Political' in Assange's Case
There is Substantial Evidence Assange Was Subjected to Constant Surveillance - CCBE
Political Offence Exception 'Outdated' in 'Modern Society' - Prosecutor
New firstOld first
15:14 GMT 27.02.2020

JUDGE REJECTS APPLICATION TO PERMIT ASSANGE TO SIT WITH LAWYERS DURING MAY HEARINGS, RATHER THAN IN THE DOC, DETAILS TO FOLLOW IN DUE COURSE

On request of your lawyers I am happy to start proceedings later than usual, every hour if need be, I am happy for you lawyers to speak to you below the court and take .. if that means proceedings will extend beyond 3 weeks for a much longer period I am much happy to do that...

I worked with Assange - extraditing him is bullying masquerading as justice https://t.co/WfKRUlBDHX

#IOHR calls for the UK not to extradite @wikileaks founder #JulianAssange to the US.

Whistleblowers and journalists who expose human rights violations around the world should be protected not prosecuted.#DontExtraditeAssange #FreeAssange pic.twitter.com/0w0dtobZcq

@khrafnsson updates us on the arguments of the prosecution: Picking and choosing between what parts of the law they wish to apply and what parts they leave out. In the law 'You can't have your cake and eat it too' reminds us Mr Hrafnsson #AssangeCase #Assange pic.twitter.com/Uf2bjIvD8E

Defense detailing problems w/ Assange's inability to communicate w/ lawyers. Judge pushing back, doesn't want to let him out of dock -- says she's happy to allow Assange/lawyers go to private room as often as they want. 'If a 3 week hearing becomes a 6 week hearing so be it'

Former whistleblower Clive Ponting, senior civil servant MOD, who revealed that the UK sank an Argentinian ship as it was sailing away during the Falklands War, has just told Craig Murray:

"On day one of the trial, the judge allowed him to be released from the dock and sit with his lawyers on the ground that, even though it was a national security case, he was no threat".

This information is being passed on to the defence team to present to the judge as a precedent for her to permit the same for Assange.

Defense: “What was outdated was the failure to provide exceptions for violent or terrorist offenses but that was what was done now.” #Assange

Lewis: “Any bare assertion that WikiLeaks was engaged in a struggle against US government...Or was seeking to bring a policy change would need to be examined far more closely.”

The hearing now resumes, with Fitzgerald (defense) outlining his argument that the US/UK extradition treaty does not rely on the Extradition Act 2003 to establish the “political offence” exception.

"There is substantial evidence that Mr Assange was subjected to constant surveillance...including conversations between Mr Assange and his lawyers. This constitutes an egregious breach of Mr. Asssange's rights"