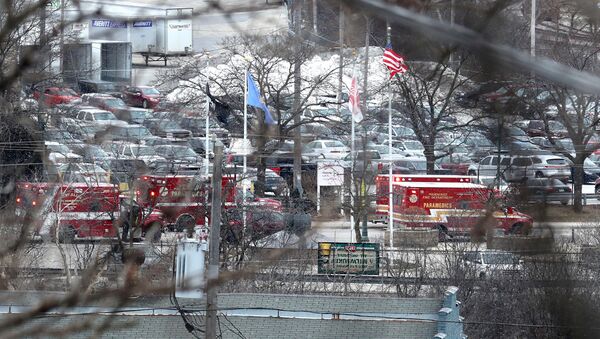 Subscribe
Several media sources say there are seven people dead, including the shooter, at a large corporate brewery in Wisconsin. Earlier, the building had been placed on lockdown and employees had been requested to hide inside.

At least seven people, including the gunman, were killed in a shooting spree at the Molson Coors Brewing facility in Milwuakee, Wisconsin, the Milwaukee Journal Sentinel reported, citing multiple sources.

The gun massacre occurred in the area of the 4000 block of West State Street, near North 35th Street and West Highland Boulevard. The Molson Coors brewery is a large set of corporate offices and brewing facilities, with over 600 employees.

According to early reports, the shooter is a former employee at the Molson Coors campus who had been fired earlier in the day.

Video claiming to have been taken at the scene emerged on social media. A large police contingent has blanketed the area, although the 'active shooter' status has been downgraded, according to reports.

Milwaukee Police Chief Alfonso Morales said that the shooter was found dead of an apparently self-inflicted gunshot. The gunman was identified as a 51-year-old Milwaukee resident.

Milwaukee Police Chief Alfonso Morales said in a press conference on Wednesday that five employees at the Milwaukee brewery and the shooter were dead.

Very sad news out of Wisconsin and Molson Coors. God Bless the people of Milwaukee. Let’s pray for all of the victims, police, medical personnel and everyone impacted by this tragedy.

"I would like to extend my deepest condolences to the families in Wisconsin earlier today, taking the lives of five people", President Trump said on Wednesday. "Our hearts break for them… and it's a terrible thing".

Earlier, conflicting media reports indicated that two to seven people had been killed.

Update regarding the critical incident that occurred on the 4100 block of West State Street. There is no active threat; however, this scene is still an active.

A press conference will be held at approximately 6pm at the south east corner of 35th and State St.

We are closely following developments surrounding the shooting in Milwaukee, Wisconsin. Our prayers are with the families who have lost loved ones and the first responders protecting the community. Congress has a duty to them all to take real action to #EndGunViolence.

Milwaukee Mayor Tom Barrett has commented on the shooting at the local Molson Coors brewery at a press conference.

"There are multiple people who have died, I believe including the shooter," Barrett said of the shooting, adding that the details will follow.

Update regarding the critical incident that occurred on the 4100 block of West State Street. There is no active threat; however, this scene is still an active.

Monitoring this frightening situation at an iconic Milwaukee brewery. Prayers go out to everyone affected. https://t.co/9drbZcffGi

There is an active situation at our Milwaukee facility and we are working closely with the Milwaukee Police Department. Our top priority is our employees and we’ll provide updates in conjunction with the police as we are able.

The gunman is reported to be a former employee of the Molson Coors facility who was fired earlier in the day. He is said to have returned to the plant in his uniform with a silencer-modified gun, WBBM-TV reported, citing a law enforcement source. It also alleged that the shooter could have entered the premises using a stolen name tag.

"It's crazy. Milwaukee is getting real crazy. It just needs to stop. So much violence in Milwaukee. Too many kids around. I know over there there's plenty kids around that area, and I just pray that everybody's safe", a local resident told WBBM-TV.