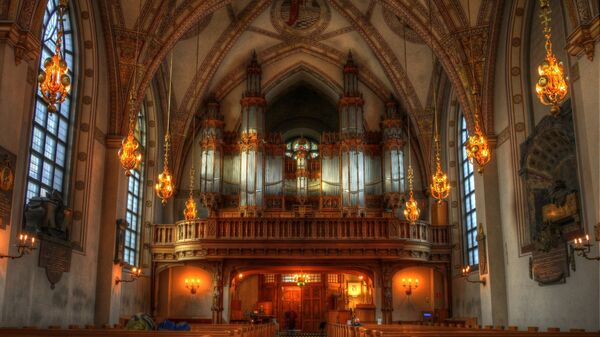 The suspected arson on Gottsunda Church in the notorious Swedish no-go zone was detected accidentally, which prevented more extensive damage.

The Gottsunda Church in the city of Uppsala was badly damaged in what police believe to be a case of arson,

The fire was discovered by chance by a police car, and the damage could have been much more extensive.

Law enforcement noticed that someone had set fire to the church's wooden facade and intervened immediately. Fire extinguishers, however, proved to be of little help, as the fire had already crept several metres up the facade. A fire brigade was summoned and after a while managed to get the fire under control.

“The fire could have caused extensive damage if the police patrol did not detect it at such an early stage”, Andreas Örth of the police said.

After a preliminary investigation and background checks the police still have no suspect. According to the church newspaper Kyrkans Tidning, the police called it an arson, yet said it was too early to judge whether a religious motive was present. The crime has so far been classed as “serious damage through fire”.

Gottsunda is classed by the police as an “extremely vulnerable area”, which is a euphemism for a notorious ghetto marked by rampant crime, unemployment, extremism, and lawlessness. Over half of Gottsunda's population of about 10,000 are immigrants. Arson attacks are not uncommon in Gottsunda.

When the news reached Archbishop Antje Jackelén, she was indignant.

“Feel anger when I hear about suspected arson at Gottsunda church”, the archbishop tweeted.

​Her response sparked profound ire, with many accusing her of hypocrisy, indulgence, and turning a blind eye to events.

“Many churches burn in the Middle East. Islamists burn them. The fact you did not understand that the same thing is going happen here is astonishing. Your 'anger' helps little”, one response said.

​“That anger goes over if it turns out to be a Muslim who has lit it up”, another user said sarcastically, referencing the Church of Sweden's strong multiculturalist and pro-immigration stance and possibly even Jackelén's personal motto “God is greater” which is a reference to the First Epistle of John, but in many ears rhymes with Islam's Allahu Akbar.

​“If you sow the wind, you will reap the whirlwind”, another reply said.

“Has the love-bombing started yet?” another user scoffed, referencing the habit of supporting victims of hate and posting a picture of the entrance to Uppsala Mosque filled with stickers following an attack in 2015.

​“Because Christians are not a vulnerable group in Sweden that is hunted and baited on a daily basis only based on their religion”, another one chimed in.

“The Gottsunda Church in Uppsala has been set on fire. Gottsunda is a blighted area with heavy Islamic extremism. Where are all the manifestations and hand hearts for this church?” blogger Projekt Morpheus tweeted.

​Following the suspected arson, Sweden's leading terrorism researcher Magnus Ranstorp suggested to the Christian newspaper Dagen that there was “no acute threat” to Swedish churches.

In recent years, though, numerous Swedish churches have suffered fire attacks and repeated vandalism, often with religious undertones, including such inscriptions as “Jihad” and “Allahu akbar” spray-painted on the walls.

Under Jackelén, the Church of Sweden moved further into embracing issues traditionally seen as controversial, such as LGBT activism and mass immigration, alienating many worshippers in a record exodus.