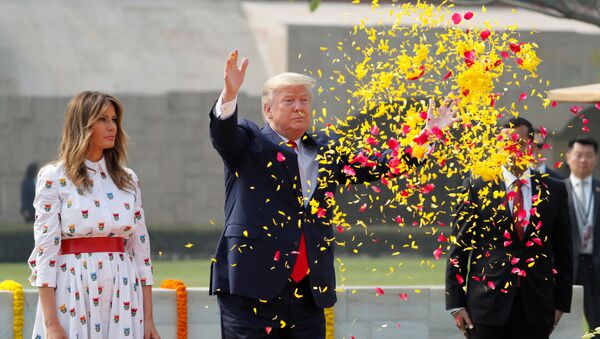 New Delhi (Sputnik): US President Donald Trump arrived in the Indian capital New Delhi on Monday night for a crucial visit and business talks with Prime Minister Narendra Modi and the inking of some agreements, including key defence and energy pacts.

As the US president began his official engagements in New Delhi on Tuesday, his Indian counterpart Ram Nath Kovind extended a ceremonial welcome to him on the forecourt of the imposing Presidential House with Donald Trump inspecting a tri-service guard of honour.

​Later, Trump along with first lady Melania paid floral tributes to iconic Indian freedom fighter Mahatma Gandhi and also planted a tree at his memorial on the banks of the river Yamuna in Delhi.

National anthems of the world's oldest democracy and world's largest democracy were played as part of the ceremony on the grounds of the Rashtrapati Bhavan in New Delhi. @realDonaldTrump @narendramodi @FLOTUS @IvankaTrump #NamasteTrump pic.twitter.com/3HobVGnGR6

Delhi: US President Donald Trump's message in the visitor's book at Raj Ghat, 'The American people stand strongly with a sovereign and wonderful India - The vision of the great Mahatma Gandhi. This is a tremendous honor!' pic.twitter.com/Rr7dU7m44z

Donald Trump then joined Prime Minister Modi for delegation-level talks at the end of which both sides signed key pacts on defence and energy, first lady Melania visited a state-run school to witness the “Happiness Class” programme – where students engage in activities like meditation and theatre to keep away anxiety and lower stress levels of participants.

.@FLOTUS will attend happiness class in our school today. Great day for our teachers, students and Delhiites. For centuries, India has taught spirituality to the world. Am happy that she will take back the msg of happiness from our school