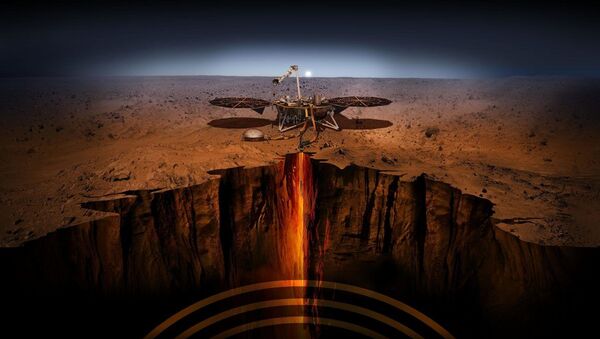 The robotic spacecraft landed on the Red Planet in November of 2018 after completing a journey of 300 million miles that lasted almost seven months. The mission could bring an understanding on how planets in the Solar System form and evolve.

NASA has made public the first data sent by the InSight Mars lander, revealing among other things that the Solar System’s second smallest planet is seismically active or in other words is prone to earthquakes, and has similarities with Earth in temperature and atmospheric pressure and dust devils. The findings were published in the scientific journal Nature.

Scientists said they were extremely excited to learn about the seismic activity occurring on the Red Planet. InSight first recorded a "Marsquake" on April 2019. Since then the rover has detected more than 450 such events and two of the earthquakes were so big that researchers were able to trace their origin. Researchers said the seismic activity on Mars is not only the result of the planet's cooling and shrinking, but of tectonic plates moving and running into each other. Scientists plan to further study the data provided by InSight as it may reveal information about Mars’ interior.

"Based on how the different waves propagate through the crust, we can identify geologic layers within the planet and determine the distance and location to the source of the quakes. These low-frequency events were really exciting, because we know how to analyse them and extract information about subsurface structure", said Vedran Lekic, an associate professor of geology at UMD and a co-author of the study.

During its 10-month stay on the Red Planet, InSight also discovered that the fourth planet in the Solar System has similarities with the Earth when it comes to weather, although there are key differences. Mars has stronger atmospheric pressure and greater temperature fluctuations.

"The atmosphere is so thin that it can heat up and cool down much faster than Earth's. At night, it cools to as low as about -95C, while in daytime, it reaches temperatures near 0C", Dr Don Banfield, of the Centre for Astrophysics and Planetary Science at Cornell University in the US and a lead author on one of the studies, told the news agency PA.

"We're still not entirely sure what the source of [the pulse] is, but it's certainly telling us about a process going on elsewhere”, said Sue Smrekar, the mission's deputy principal investigator from NASA's Jet Propulsion Laboratory.

InSight also recorded evidence of dust devils, a whirlwind of soil that spin like tornadoes at a speed of 60 miles per hour (96 kph). The lander will continue studying the Red Planet for another year.