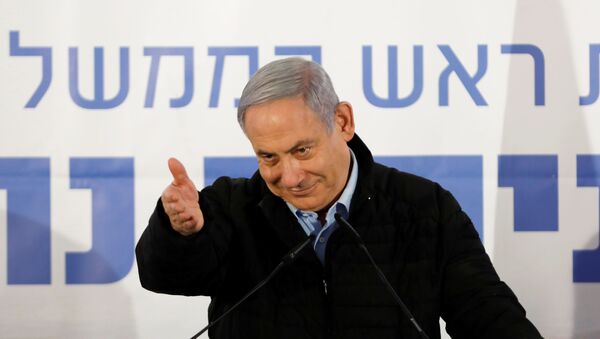 Elizabeth Blade
All materials
With less than a week left until Israel goes to the polls for a third time in less than a year, the country's Prime Minister Benjamin Netanyahu is stepping up his election campaign, firing left, right and centre in an attempt to obtain the 61 seats needed to be able to form a government.

Apart from launching a Russian-language campaign aimed at "stealing" votes from Avigdor Lieberman's Yisrael Beitenu, the premier has opened another front, focusing on Israeli Arabs, giving an interview to one of the local Arabic-language news websites Panet, where he called on Arabs to vote for Likud and acknowledge his party's investment in their sector.

This included an investment of $5 billion in the improvement of infrastructure in Arab towns and neighbourhoods, the opening of an additional 18 police stations that are meant to curb the spread of crime and violence, and a boost in cash to encourage higher education among Israeli Arabs.

Netanyahu is aware that he cannot count on Arab voters. Although in 1996 when he was elected PM for the first time, 22 percent of Arabs (predominately Druze and Circassians) voted for the Likud. Over the years this support has dwindled and so did the numbers, rarely exceeding five percent.

But the premier has learned from past mistakes. Gone is the divide-and-conquer policy that was typical of the 2015 campaign where in an attempt to encourage right-wing voters to cast their votes in favour of his party, he posted a video threatening that if they failed to do so, the rule of Likud would be in danger.

Another lesson he has learned is connected to Israel's Jewish population. After calculating that what has separated him from victory in the past two rounds was some 200,000 votes, Likud has decided to exert extra effort into making sure that this time around they receive enough ballots.

To do that Netanyahu has decided to tone down his divisive rhetoric and show more deeds than promises. After his previous campaign failed, where he vowed to extend sovereignty over the Jordan Valley if re-elected, the PM went one step further going to Washington and together with President Donald Trump rolling out a "deal of the century" peace plan that aimed at resolving the decades' long Israeli-Palestinian conflict.

Yet, a poll conducted shortly after the release of the American initiative revealed that even though 67 percent of Israelis thought the peace plan was beneficial for Israel, Likud was still three seats behind the Blue and White.

Flying to Moscow where he met with Russian President Vladimir Putin and bringing back Naama Issachar, the jailed Israeli woman who was sentenced to seven and a half years in a Russian prison for drug smuggling, didn't help either.

Nor did it help when Netanyahu "stole" an Ethiopian member of parliament from the Blue and White, adding him to the ranks of Likud, or when he made a blitz visit to Africa, where he met with the President of Sudan, a country that has been traditionally hostile to Israel, with the two states agreeing to work towards the thawing of ties.

In an op-ed on the Channel 20 website, a news outlet that has long been associated with the right-wing, Eliran Tal, the outlet's political correspondent wrote: "When I interviewed Netanyahu, I asked him whether he realised that there was no substitution for a personal touch. He nodded", wrote Tal.

While in the September round of elections, Netanyahu chose to focus on marketing himself on Twitter and Facebook, hitting the ground only four times during the entire campaign, this time around he's adopted the same tactics used during the primaries where he attended 40 conferences in ten days.

Over the past few months, appearances by Netanyahu in markets, shopping malls, conferences, and political salons have been frequent with people waiting for him and embracing him as if he was a rock star. 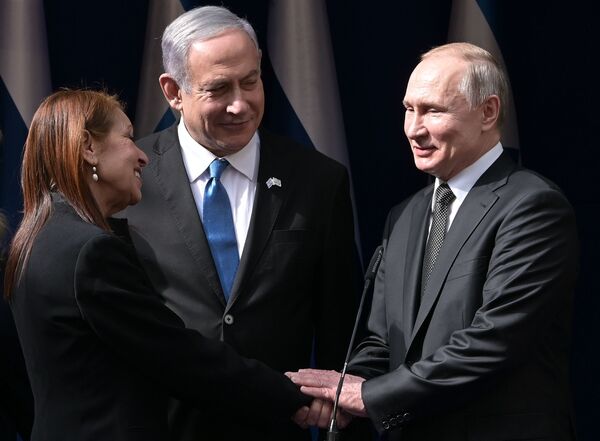 Russian President Vladimir Putin and Israeli Prime Minister Benjamin Netanyahu after meeting in Jerusalem with the mother of an Israeli woman, convicted in Russia
© Sputnik / Sergey Guneev
/
Go to the photo bank

And these efforts have paid off. Recent polls suggest that Likud is now leading with 34 seats, while Blue and White is falling one seat behind, for the first time in months.

However, to achieve a sweeping victory, form a government, and pass laws that will help him avoid facing trial in a series of graft probes, Netanyahu will need a bit more than polls since the latter cannot often be relied upon.

He will need to show achievements on issues that concern ordinary Israelis, including the situation in the south, the growing gaps between the rich and the poor, or the more recent threat emanating from the spread of the coronavirus.