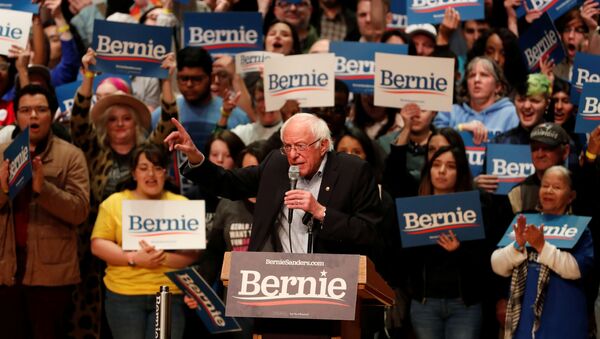 © REUTERS / CHRIS KEANE
Subscribe
International
India
Africa
Lilia Dergacheva
All materialsWrite to the author
The Vermont Senator has a decisive lead over the Democratic pack after his Nevada triumph as votes across 15 more states loom ahead.

After Bernie Sanders’ win in Nevada and on the threshold of the South Carolina primary, the Democratic establishment has doubled down on its efforts to deal with the Vermont Senator’s growing likelihood of grabbing the party’s nomination for the November presidential vote.

For instance, Mike Bloomberg’s new self-sponsored 90-second ad crushed Sanders’ earlier hard stance on gun control, claiming emphatically that the politician was elected to the House in 1990 supported by the National Rifle Association. To the menacing sounds of a background jingle, subtitles pop up on the screen reading: “Bernie voted with the NRA and opposed federal background checks", in an apparent reference to Sanders' criticism of a background check bill in the 1990s and subsequent votes against allowing lawsuits targeting gun manufacturers -  issues that were in tune with the NRA. However, senior Sanders adviser Jeff Weaver promptly weighed in stating the National Rifle Association never endorsed Bernie Sanders and “he has never taken a dime of their money".

“In fact, he lost his 1988 congressional race because he backed an assault weapons ban", Weaver asserted.

Pete Buttigieg subsequently appeared on TV lambasting Sanders over healthcare in South Carolina, the focus of the candidates’ attention over the next few days.

Joe Biden’s campaign, in turn, followed Bloomberg, coming up with a new digital ad, which, according to Politico, accuses Bernie Sanders of struggling to undermine Barack Obama’s 2012 re-election by threatening to challenge him in the primaries. The clip, first obtained by the edition, states that Sanders “can’t be trusted” “when it comes to building on Barack Obama’s legacy".

“Bernie Sanders was seriously thinking about challenging our first African American president in a primary", the voice-over says defiantly, citing an Atlantic report called “The Hidden History of Sanders’s Plot to Primary Obama".

Meanwhile, Facebook has been preoccupied with looking into suspicious content backing Vermont Senator Bernie Sanders’s presidential campaign, The Wall Street Journal reported citing people familiar with the matter. While it is unclear if the internal investigation is still underway, sources said some of Facebook’s management were aware of it.

Sanders’ latest win showcased his popularity among a broader segment of Democratic supporters, including Latinos, African-Americans, and union members than in polls held in more homogeneous Iowa and New Hampshire, the first two states to hold primaries.

“We’ve brought together a multigenerational, multiracial coalition that is not only going to win Nevada, it’s going to sweep this country", Sanders addressed his audience in San Antonio, Texas, on Sunday.

As many as 15 key primaries will take place in the next eight days, culminating in Super Tuesday, 3 March, when 14 states head to the polls. Since centrists in the party have failed to coalesce around a moderate candidate, the nomination is likely to be there for Sanders, who has strengthened his position after the latest win.

Sanders: ‘I don’t Сare Who Putin Wants to be President’

The only thing that might have cast a shadow on Sanders’ current lead (or at least caused a small controversy) is Friday’s Washington Post report alleging that Russia might be trying to twist the primaries in Sanders’ favour.

Per The Washington Post, Sanders had been briefed by US intelligence about an alleged Russian meddling effort. Addressing reporters that same day, Sanders hit back stating that he didn’t care who Moscow “wants to be president", saying his “message” to Russian President Vladimir Putin was “clear: stay out of American elections". A day earlier, The New York Times published a conflicting report “citing intelligence officials” claiming that Russia’s meddling was actually aimed at helping to get President Trump re-elected.

In denial of those allegations, Moscow dubbed the NYT piece “another paranoid report” which it expects to see in droves in the run-up to the November elections.

Trump National Security Advisor Robert O'Brien said he hadn't seen "any intelligence" that Russia was "doing anything to get President Trump re-elected", suggesting the report was "the same old story that we've heard before".

The debate started shortly after Trump’s gleeful tweet that the establishment would go to great lengths to prevent Sanders from obtaining the nomination.

This prompted some Dems to call on candidates including Minnesota Senator Amy Klobuchar and former South Bend, Indiana Mayor Pete Buttigieg to exit the race in order to consolidate the moderate vote. However, the remaining candidates all expressed their determination to lock horns on Super Tuesday (3 March).