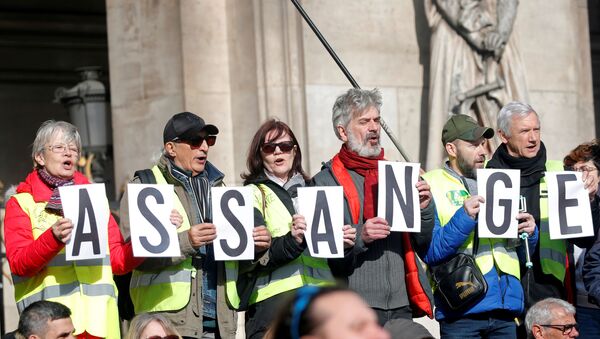 © REUTERS / Charles Platiau
Subscribe
LONDON (Sputnik) - The UK government should be "scared to death" of a popular uproar over its treatment of the imprisoned founder of WikiLeaks, Julian Assange, especially in the event of him being extradited to face espionage charges in the United States, Chris Marsden, the national secretary of the UK Socialist Equality Party, said.

The remarks come amid Assange's extradition hearing that started on Monday at Woolwich Crown Court in the UK capital of London. Earlier in the day, dozens of WikiLeaks supporters gathered outside the court, carrying banners with messages such as "Don’t Extradite Assange" and "The Truth Will Win."

According to Marsden, the accusations against Assange were effectively a "frame up" arguably motivated by Washington's desire to punish the whistleblower for his role in the publishing of materials implicating US forces in possible war crimes.

"This is the trial of the century. It's an attempt to rail-road into prison a heroic figure who has exposed war crimes in Afghanistan and Iraq and is now being framed up on espionage charges which will ensure he never sees the light of day again ... They should be scared to death of sending him to America because of the ferocity of the public response," the politician said during a protest outside Woolwich Magistrates Court.

According to Marsden, everyone knows that it is a show trial, but the intent of those protesting near the court is to put maximum pressure on the state apparatus to ensure Assange's freedom.

"Now the issue is going to be fought out in court, the eye's of the world are on these proceedings, and the more the truth comes out the more opinion will be polarized and the greater the possibility of a mass mobilization in defense of Julian Assange," he added.

Woolwich Magistrates Court was otherwise sealed off to members of the public, with protesters confined to a demonstration at the gates close to Belmarsh prison, where Assange has been incarcerated since last September. Several activists had also pitched tents and camped out during the night, being later joined by political activists from multiple countries, including members of the yellow vest movement in France.

Joe Brack of the Julian Assange Defense Committee said that he had decided to make camp outside of court precisely due to such "occupations" being an effective method of protest following similar actions during last summer's sizable demonstrations from the eco-activist group Extinction Rebellion.

Brack also argued that the Assange case had likely become a source of stress for the UK government, especially given that it may potentially involve a situation where Prime Minister Boris Johnson may have to balance the opinion of the UK public with the demands of the US government.

"This has gone totally global and it's a disgrace for any justice system to be involved in this kind of process for the US. I know for a fact that in the Home Office there's a lot of panic, their reputation is being trashed by the business of this extradition," he said.

Jim Curran, chairman of the Irish Civil Rights Association, said outside of court that the amount of attention now being given to Assange's situation was proving a headache for both the UK and US governments, especially within the context of respecting both freedom of speech and the freedom of the press. 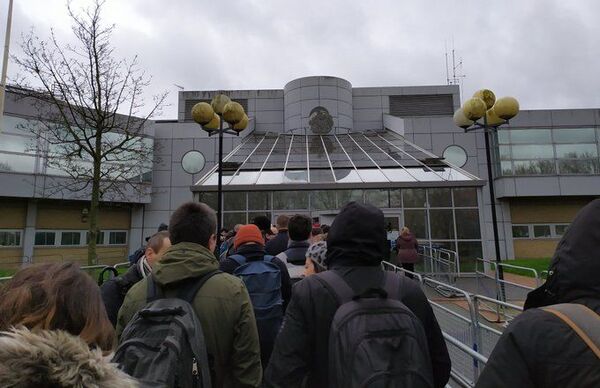 Assange is currently being sought by the United States for extradition to face multiple charges of espionage following the 2010 leak of classified materials relating to military operations in Afghanistan and Iraq.

If convicted in the United States, Assange could face a prison term of up to 170 years. The ongoing initial court hearing will likely continue for the rest of the week, with a second hearing set for May.

000000
Popular comments
Assange will be extradited. BoJo will extradite him.

PranSa
25 February 2020, 07:05 GMT
000000
If he is extradited, it is like a nail in the coffin of truth. Julian said, "If wars can be started by lies, peace can be started by truth." What kind of a world do you want to live in? Why follow Sauron's lies. (ref. Lord of the Rings). Sauron does not share power!
Unclefred
27 February 2020, 04:09 GMT1
000000
Newsfeed
0
New firstOld first
loader
LIVE
Заголовок открываемого материала
Access to the chat has been blocked for violating the rules . You will be able to participate again through:∞. If you do not agree with the blocking, please use the feedback form
The discussion is closed. You can participate in the discussion within 24 hours after the publication of the article.
To participate in the discussion
log in or register
loader
Chats
Заголовок открываемого материала
Worldwide
InternationalEnglishEnglishMundoEspañolSpanish
Europe
DeutschlandDeutschGermanFranceFrançaisFrenchΕλλάδαΕλληνικάGreekItaliaItalianoItalianČeská republikaČeštinaCzechPolskaPolskiPolishСрбиjаСрпскиSerbianLatvijaLatviešuLatvianLietuvaLietuviųLithuanianMoldovaMoldoveneascăMoldavianБеларусьБеларускiBelarusian
Transcaucasia
ԱրմենիաՀայերենArmenianАҧсныАҧсышәалаAbkhazХуссар ИрыстонИронауОssetianსაქართველოქართულიGeorgianAzərbaycanАzərbaycancaAzerbaijani
Middle East
Sputnik عربيArabicArabicTürkiyeTürkçeTurkishSputnik ایرانPersianPersianSputnik افغانستانDariDari
Central Asia
ҚазақстанҚазақ тіліKazakhКыргызстанКыргызчаKyrgyzOʻzbekistonЎзбекчаUzbekТоҷикистонТоҷикӣTajik
East & Southeast Asia
Việt NamTiếng ViệtVietnamese日本日本語Japanese中国中文Chinese
South America
BrasilPortuguêsPortuguese
NewsfeedBreaking
00:04 GMTMagnitude 6.0 Earthquake Rocks Indonesia - EMSC
YesterdayPentagon Chief Says US Ready to Support Taiwan in Face of China’s Military Rise
YesterdayAmericans' Confidence in US Military Continues Its Decline, Survey Shows
YesterdayCNN Fires Chris Cuomo Over His Efforts to Help Brother With Sexual Harassment Claims
YesterdayUS Democracy in Trouble? Half of Young Americans Polled Agree
YesterdaySuper-Union Leader Explains Donation Cut-Off to Cash-Strapped Labour Party
YesterdayFlight From Tel Aviv to Moscow Changed Flight Level Due to NATO Spy Plane - Air Authority
YesterdayPolice: Parents of Suspected Michigan School Shooter Had Help Hiding in Detroit Warehouse
YesterdayKiev Seizure, Donbas Advance: German Tabloid Sources Fantasize Russian Invasion of Ukraine
YesterdayTurkish Authorities Uncover Explosive Device on Police Car Assigned to Erdogan Rally
YesterdayBlast Heard Over Iran's Natanz, Where Nuclear Facility Located
YesterdaySouth African Province at Centre of Omicron COVID Variant Sees More Children in Hospital
YesterdayPolish Prime Minister Orders Cybesecurity Alert Ahead of UN Forum
YesterdayGreek Prime Minister Assures Vatican That Condition of Migrants in Greece Improved
YesterdayUS Warns of ‘Terrible Consequences’ of Possible Chinese Invasion of Taiwan
Yesterday‘Killer Robots’ Threat Persists as US Unwilling to Discuss Ban on Lethal Autonomous Weapons Systems
YesterdayLionel Messi Reveals He 'Never' Wanted to Become Best Football Player
YesterdayPutin, Biden Will Hold a Video Call on Tuesday Evening
YesterdayGiant Christmas Tree Set Up Near Church of the Nativity in Bethlehem
YesterdayParty Like It's 1939: German Chancellor's Send-Off Compared to Nazi Rally