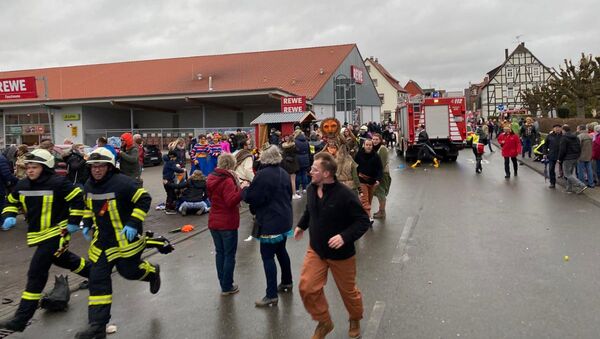 Germany is celebrating Carnival, with the biggest parades taking place in Cologne, Duesseldorf and Mainz. Police in Western Hesse have declared that all other Carnival parades in the state will be cancelled as a precaution.

At least 30 people, including children, have been injured in the German town of Volkmarsen, near Kassel, after a car rammed into a carnival parade, German police said on Monday, adding that the driver acted 'intentionally'.

The driver, who was detained immediately after the incident, was identified as 29-year-old German national.

Earlier in the day, German media reported citing eyewitnesses that a silver Mercedes allegedly bypassed a fence, and after gaining speed, drove into the crowd. Eyewitnesses also said that they had the feeling that the driver deliberately targeted children. The incident occurred at 14:30 local time.

​In the meantime, police have issued a statement via Twitter, saying that all carnival parades in North Hesse will be cancelled.

Law enforcement officials have also urged eyewitnesses not to publish photos and videos from the scene on social media. Instead, they are advised to transfer the images to the police via official channels. Regional police in North Hesse have asked all parties to refrain from speculation as to the causes of the incident.

According to reports, some 1,500 people were expected to take part in the parade. The population of the town, which is located 28 km northwest of Kassel, is around 6,800 people.

​The incident comes less than a week after a shooting shook Hanau, western Germany in which nine people were killed and several injured in two shisha bars.