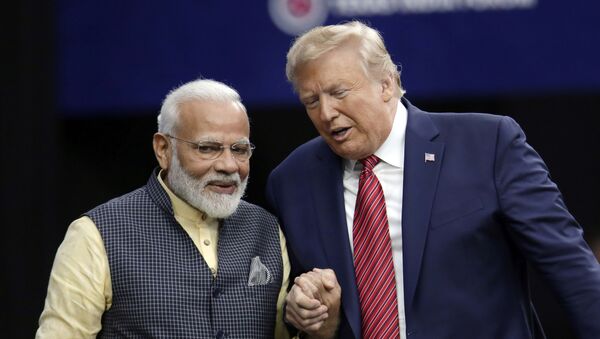 New Delhi (Sputnik): US President Donald Trump and members of his family are en route to India, while Prime Minister Narendra Modi is eagerly waiting in the city of Ahmedabad in his home state of Gujrat, where the two leaders are set to inaugurate the largest cricket stadium in the world.

On Monday, Prime Minister Narendra Modi, who has an army of 53.1 million followers on Twitter, shared US President Donald Trump’s video-announcement of him departing for India along with an optimistic caption.

Your visit is definitely going to further strengthen the friendship between our nations.

President Trump also expressed excitement; with a special tweet he posted in the Hindi language that translates as, "We are eagerly waiting to land in India! We are on our way, and will meet everybody in just a few hours."

The preparations for Trump’s visit to India are happening at full speed: new walls were erected last week to hide the slums that would otherwise be seen on the route from the Ahmedabad Airport to Sardar Patel Stadium, the world's largest, where a huge crowd is expected to gather for the “Howdy Modi”-like event “Namaste Trump”, which will be addressed by the two world leaders.

Final touches on the wall in Ahmedabad that was constructed on the route to Modi-Trump's roadshow to keep stray dogs away! pic.twitter.com/S80fKGXYaU

​Trump, along with his third wife Melania, and his daughter Ivanka have also kept a time slot for visiting India’s white marbled monument of love and the Taj Mahal in Agra, which is considered a "Wonder of the World” despite dating back to the Mughal Empire rather than Hellenic antiquity.

As part of the preparations, 500 cusecs (14,000 litres per second) of fresh water were released into the holy river Yamuna so as to improve its environmental condition and maintain its flow within the suburbs of Agra. In addition, the graves of Mughal Emperor Shah Jahan and his wife Mumtaz were also given mud-washes by the Archaeological Survey of India (ASI) – which is a government body that is responsible for the conservation and preservation of India’s cultural monuments.

Trade, H-1B visa, defence and bilateral relations are expected to be the dominant topics of discussion between Prime Minister Modi and President Trump during the last leg of the latter’s two-day India tour which will be hosted in the Raisena Hills at New Delhi.

However, one incident did happen over the weekend that triggered some anxiety-ridden hours for workers at the Sardar Patel Staduim – which is also known locally as Motera Stadium. The temporary make-shift entrance made of steel rods and bonhomie banners for President Trump, Prime Minister Modi and their high-level entourage at the Motera Stadium collapsed due to strong winds.

​It is just a matter of time to see how Ahmedabad, where over 10,000 police officials have been deployed to maintain order and security - welcomes President Trump during his first-ever visit to India.

Four cargo planes carrying special security equipment and special vehicles for the US President also landed in Ahmedabad over the weekend as part of preparations for his India visit, which will last a little less than 36 hours, local media reported.

According to President Trump's Twitter update, he and his wife Melania left the White House  in a helicopter 13 hours ago and is expected to land in India at around noon, local time.

Departing for India with Melania! pic.twitter.com/sZhb3E1AoB