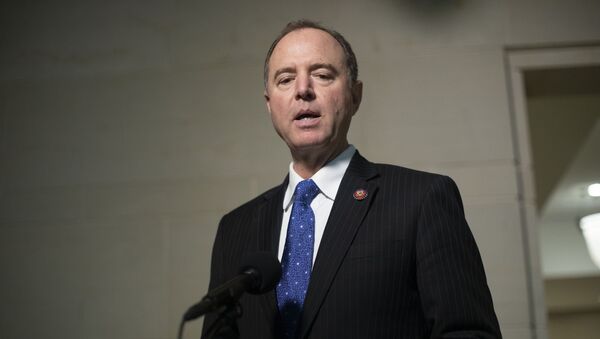 © AP Photo / Pablo Martinez Monsivais
Subscribe
This week, the New York Times reported that members of the US intelligence community had briefed senior House lawmakers about alleged Russian efforts to meddle in the 2020 presidential campaign in favour of Donald Trump.

Adam Schiff, the Democratic chairman of the House Intelligence Committee, is responsible for leaking details about the classified House briefing on alleged Russian efforts to meddle in the 2020 election to the press, President Trump has claimed.

“Just another Shifty Schiff leak. Isn’t there a law about this stuff?” Trump wrote on Twitter, responding to a tweet by CBS reporter Chatherine Herridge which said that a source familiar with the House briefing had pressed intelligence agents regarding their Russian meddling claims.

Just another Shifty Schiff leak. Isn’t there a law about this stuff? https://t.co/JWE0oPhiw9

"Somebody please tell incompetent...and corrupt politician Adam 'Shifty' Schiff to stop leaking Classified information or, even worse, made up information, to the Fake News Media," Trump added, warning that "someday he will be caught, and that will be a very unpleasant experience!"

Somebody please tell incompetent (thanks for my high poll numbers) & corrupt politician Adam “Shifty” Schiff to stop leaking Classified information or, even worse, made up information, to the Fake News Media. Someday he will be caught, & that will be a very unpleasant experience!

Schiff did not respond directly to the president’s tweets, but accused him of “deflecting” and making false claims regarding Russian meddling in his comments to the press. “You welcomed Russian help in 2016, tried to coerce Ukraine’s help in 2019, and won’t protect our elections in 2020,” Schiff wrote.

Nice deflection, Mr. President. But your false claims fool no one.

Now you fired your intel chief for briefing Congress about it.

On Sunday, Trump told reporters that “Adam Schiff and his group” had leaked information about the briefing to the media, and that he was not briefed on the report. “They ought to investigate Adam Schiff for leaking that information,” Trump said.

Trump and Schiff have clashed repeatedly, particularly after the congressman became one of the key Democrats in Congress pushing to impeach the president. House Democrats led by Schiff approved impeachment on charges of abuse of power and obstruction of Congress, but Trump was acquitted by the Republican-controlled Senate.

The New York Times reported Thursday that US intelligence officials had told lawmakers in a February 13 briefing that Russia was trying to meddle in the 2020 election “to try to get President Trump re-elected.” Republicans in the briefing reportedly rejected the allegations, citing Trump’s tough stance on Russia. Moscow slammed the claims Friday, calling the story a “paranoid report of the kind which, unfortunately, we will see more and more of as the election approaches.”

On Friday, the Washington Post issued what appears to be a conflicting report, suggesting Bernie Sanders had been briefed by intelligence officials who told him that Moscow was actually meddling in his favour. The newspaper said it was “not clear what form…Russian assistance has taken.” Commenting on the story, Sanders said his “message” to Russian President Vladimir Putin was to “Stay out of American elections.”

On Saturday, Trump National Security Advisor Robert O’Brien said he had “pretty good access to our intelligence,” and that he hadn’t seen any information to indicate that Russia was “doing anything to attempt to get President Trump re-elected.”

Schiff has long claimed that Russia meddled in the 2016 presidential race to get Trump elected, continuing to make the allegation even after the release of Special Counsel Robert Mueller’s report regarding alleged Trump-Russia collusion in April 2019. In that report, Mueller said there was no evidence of any conspiracy between Trump and the Kremlin, nor any indication that Russia somehow tampered with or otherwise manipulated the voting results. He did allege, however, that Russia engaged in an “aggressive” internet trolling campaign.