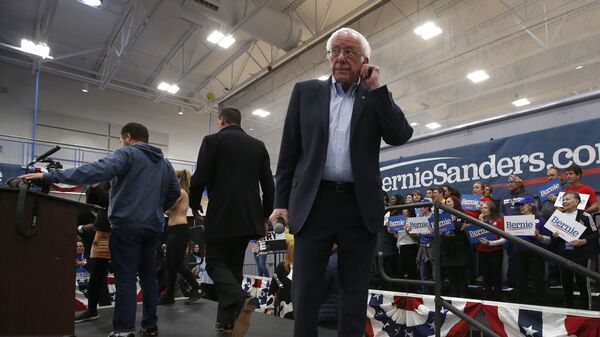 © AP Photo / Rich Pedroncelli
Subscribe
International
India
Africa
Earlier this week, the Washington Post reported, citing its own sources, that the campaign of Democratic presidential candidate Senator Bernie Sanders has been backed by Russia. Mr Sanders, for his part, told the outlet that his message to Putin was clear: "stay out of American elections".

Marcus Godwyn, a UK-based political analyst, shared his reaction to the news and reflected on the neverending 'Russiagate' saga in the US political establishment.

Sputnik: How relevant is the news about Russia's "interference" in US domestic politics, especially given the fact that Mueller’s report ended in nothing?

Marcus Godwyn: I think we have to ask ourselves the question: relevant to whom? To people interested in facts and truth it is not relevant of course. It's just groan, groan, will the Democrats ever talk about anything else ever again. Let us remember how propaganda works and that it is very largely by endless repetition from many sources. The American and western public, the large majority of whom know nothing about Russia, Putin or the true nature of their own governments, were bombarded for over two years by non-stop propaganda that Russia and Putin got Trump elected by surreptitious "meddling" in US "democracy" and then they heard ONCE that the Mueller report was forced to admit that no evidence of collusion between Trump and Russia had been found. That FACT nonetheless has little or no impact on all those disappointed Democrat, feminist, "liberal" Clinton voters whereas the two and a half years of massive nonstop indoctrination has a massive effect in every sense of the word. This why to those dead set against any rapprochement with Russia this is hugely relevant. What's more: just like the so-called "state-run doping" scandal in sport or "the war on terror", there is no end to it. They'll bring it up for the next election and the next and the next. Truth and facts are of zero importance here. Only the impression amongst as many US voters as possible that Russia is a dangerous, subversive influence who is "highly likely" to be preventing them from getting the result they want.

Sputnik: "It was not clear what role they were going to play. We were told that Russia, maybe other countries, are gonna get involved in this campaign," Sanders said. Which countries do you think will be targeted other than Russia? What is the US agenda now?

Marcus Godwyn: Let's just hope that all this popularity among various foreign countries and their associated deep states won't go to Sander's head and lead him into megalomania or anything of the sort. Obviously, other "meddlers" could include China as another country with large high tech resources especially in view of the US campaign against Huawei and its 5G technology that some claim will render American surveillance methods useless, Iran is probably third on the list! I'm sure North Korea could deeply influence millions of US voters too. Who knows, maybe even Macron is using the French secret services to influence the US election as relations seem to be even more strained between the erstwhile allies.

Sputnik: Can the 'Russian influence' narrative in the run-up to the November 2020 elections be called a planned PR campaign for use against Trump if he wins again? If so, what else can we expect in this context?

Marcus Godwyn: Yes, of course, it's a PR campaign. They may come up with some new "evidence" or nuances but, for the reasons I've outlined above, they have no need, nor the ability to create something really new this time around: repeat, repeat, rinse and reuse! Let us now reflect on exactly what is going here. Discord and tension between different countries can come about for natural reasons depending on which part of the world and what epoch in history we are looking at. More often this is caused by deliberate sabotage and "meddling" in order to bring about a state of potential or actual war. War is supremely advantageous for those who lend money to governments for interest as nothing creates massive debt faster than war. As Herman Goering famously said "The people of course never want war but they can easily be brought round by means of effective propaganda" (Not the exact wording I think but exact meaning). The current situation between Russia and the US and the west in general is simply not of Russia's making. That is a fact. It is also a fact that even if their collective memory of war is far more distant than that of European peoples the American people do not want constant international tension or war. Therefore it is not surprising that a president campaigning on a ticket of better relations with Russia and an end to all the US "interventions" in the middle east won. What the Democrats and other politicians, the financiers who control them have done is come up with an incredibly simple and incredibly evil rouse were they say. "Russia is our enemy and the biggest threat to our democratic freedoms etc. Therefore it follows that Trump is a traitor collaborating with our enemy against the interests of the American people." This formula can be used ad Infinitum against anybody in politics at anytime anywhere who actually wants or tries to defuse international tensions by dialogue and mutual respect. This brings me on to question four!

Sputnik: Could the anti-Russian voices in Washington be emanating from the defence sector, out of fear that a candidate like Sanders may want to shift US federal spending from the military into public sectors such as health care and education?

Marcus Godwyn: As Frank Zappa famously said: "Politics is the entertainment department of the military-industrial complex." Of course, the massive arms-producing gravy train of profit and power building at a huge cost to the American taxpayer is the main influence and main power here headed by those who control the Federal Reserve i.e. the issuance of money or not as they see fit for themselves in the US and most other countries. If Bernie wants to spend more money on hospitals or infrastructure, they simply will not let him just as they have not let Trump pull the armed forces out of the middle east or improve relations with Russia. They run the show and will continue doing so while most US voters continue to believe that the person they vote for will make or will be able to make any difference.