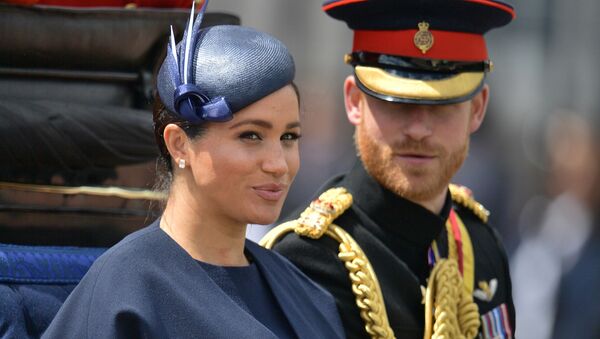 © AFP 2021 / DANIEL LEAL-OLIVAS
Subscribe
A spokeswoman for the couple confirmed on Friday that they will not be able to call themselves “royal” amid their hopes to turn “Sussex Royal” into a global multi-billion trademark.

Prince Harry and Meghan Markle’s foundation had earlier applied for a trademark in June of 2019, covering a range of items including clothing and stationery as well as books, products, documentaries and their charitable foundation.

“While The Duke and Duchess are focused on plans to establish a new non-profit organisation, given the specific UK government rules surrounding use of the word ‘Royal,’ it has been therefore agreed that their non-profit organisation, when it is announced this Spring, will not be named Sussex Royal Foundation. The Duke and Duchess of Sussex do not intend to use ‘SussexRoyal’ in any territory post Spring 2020,” the statement from the spokeswoman reads.

Earlier reports suggested that Queen Elizabeth II had prohibited the couple to use the word “royal” after lengthy talks with senior officials in Buckingham Palace. The decision was made because “if they aren't carrying out official duties and are now seeking other commercial opportunities, they simply cannot be allowed to market themselves as royals,” the sources told The Daily Mail.

The decision means that the Duke and Duchess of Sussex will have to scrub the name “Sussex Royal” from their Instagram account, where they famously announced their “Megxit” move, and their website, which was rolled out at the same time.

The couple had announced they would be stepping down from their roles as senior royals to move to Canada to live a “financially independent” life back in January.

000000
Popular comments
The former royals are discovering, like millions of non-royals, that making one's way in this world can be more difficult than dreams had anticipated.