Number of Coronavirus Cases in Italy Rises to 79 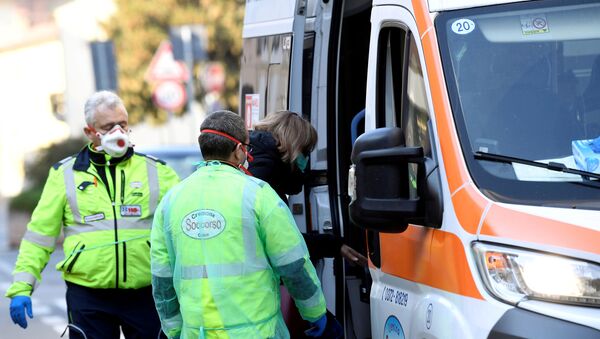 © REUTERS / FLAVIO LO SCALZO
Subscribe
An outbreak of pneumonia caused by a new strain of coronavirus was first registered in the Chinese city of Wuhan, in Hubei province, and has since claimed the lives of more than 2,300 people in mainland China.

The number of patients with coronavirus in Italy has risen to 79, local authorities said on Saturday. Two deaths from the new virus, both elderly, have already been confirmed in the country, one in Lombardy and one in Veneto.

""79 people are infected with coronavirus, located in 5 regions: 54 of them are in Lombardy, 17 in Veneto, 2 in Emilia Romagna, 2 in Lazio and 1 in Piedmont. At present, 33 people are hospitalised with symptoms, of which 18 are in intensive care, 11 are in home isolation. Two died, while one person was discharged from Spallanzani", Head of Civil Protection Angelo Borrelli commented.

Meanwhile, Italian Prime Minister Giuseppe Conte announced after an emergency ministerial meeting that Italian regions most affected by the new coronavirus will now be able to restrict the movement of people in order to prevent the spread of the disease.

"In areas considered to be hotbeds, neither entry nor exit will be permitted unless there is a special exemption," Conte told reporters after the five-hour meeting, also saying that a relevant decree has been adopted, which outlines measures to control the emergency epidemiological situation in the country.

Earlier, Italy confirmed 66 cases of the novel coronavirus, with 62 of them registered in the last two days, Agenzia Italia reported citing the authorities. Out of 66 cases, there were 47 in Lombardy, including two in Milan, 12 in Veneto, 3 in Emilia Romagna, 3 in Lazio and one in Piedmont.

The Italian government earlier announced that a quarantine would be arranged for those who had been in contact with the infected, the municipalities affected with coronavirus cases have been isolated, schools and offices remain closed and residents were asked to stay home.

Prime Minister Giuseppe Conte posted earlier a message on his Facebook saying that the government is working tirelessly to address the current situation.

On 31 January, the Council of Ministers declared a state of emergency in the country over the outbreak.