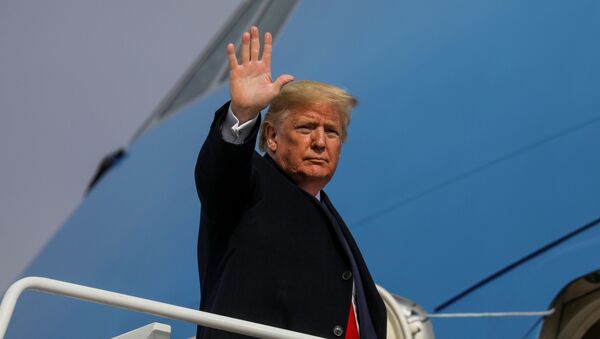 Oleg Burunov
All materialsWrite to the author
In April 2019, then-US Special Counsel Robert Mueller concluded in a report that his probe had found no evidence of collusion between the Trump campaign and Russia in the run-up to the 2016 US presidential election.

The New York Times has cited several unnamed sources as saying that Russia is interfering in the 2020 US presidential election campaign “to try to get President Trump re-elected”.

The claims were made by US national intelligence officials during the 13 February House Intelligence Committee briefing, during which the officials accused Russia of meddling in both the 2020 Democratic primaries and the general election.

The officials asserted that part of Russia’s alleged election interference efforts is to undermine confidence in the American election system and use “ransomware attacks to damage or interfere with voting systems or registration databases”.

The sources claimed that during the briefing, Trump’s allies rejected the allegations, “arguing that he had been tough on Russia and strengthened European security”.

Both the Office of the Director of National Intelligence and the White House has yet to comment on the matter.

According to the sources, shortly after the briefing, Trump slammed outgoing acting director of national intelligence Joseph Maguire for allowing the gathering to take place.

POTUS specifically pointed to the fact that the briefing was attended by Democratic Representative Adam Schiff, who led impeachment proceedings against Trump and who the US President feared would “weaponise” the intelligence about Russia’s alleged support for him.

The 13 February gathering was followed by Trump’s announcement that he was replacing Maguire with US Ambassador to Germany Richard Grenell; White House officials claimed the timing was purely coincidental.

The new election meddling accusations come after then-US Special Counsel Robert Mueller confirmed in a report in April 2019  that his inquiry had found no evidence of collusion between the Trump campaign and Russia ahead of the 2016 US presidential election.

Russia, for its part, has repeatedly denied any claims of interference in the US political system, while Trump rejected the allegations as a political witch hunt.