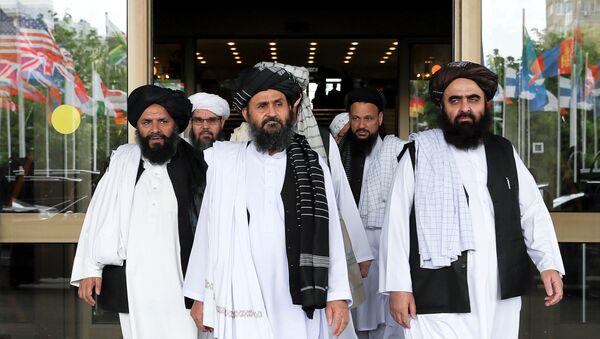 © REUTERS / Evgenia Novozhenina
Subscribe
With November presidential elections looming, Donald Trump may have found himself in a hurry to reach any sort of a peace deal with the Taliban and pave the way for intra-Afghan negotiations. Previous attempts by US administrations – including the current one – have been riddled with halts and changes of heart.

There has been word of the United States finally bringing its on-and-off efforts to kick-start an Afghan peace process beyond merely pompous talk.

Last Friday, the US and the Taliban agreed to a week-long reduction of violence – effectively a beta test of the group’s ability to maintain a lasting peace, to be followed by a phased drawdown of most of the nearly 13,000 troops the United States still deploys in Afghanistan.

The Taliban said on Monday that it expects to sign a peace deal with the United States by the end of the month – the first step to end the 18-year war – to be accompanied by an exchange of thousands of detainees held by the US-led coalition, the Afghan government, and the militants.

The US-Taliban peace process is as old as the Afghan war itself. The United States invaded Afghanistan, ruled by the extremist Islamic movement at the time, for sheltering then al-Qaeda leader Osama bin Laden, who was identified as the main mastermind behind the 9/11 terror attacks.

The Taliban initially refused to turn bin Laden over to the US, but offered to try him in Afghanistan under Islamic law shortly before the US invasion. They also pledged to release eight Western aid workers, including two Americans, who had been accused of trying to convert Afghans to Christianity, if the US halted the bombing of Afghanistan. George W. Bush rejected both offers and ordered the invasion the following day. 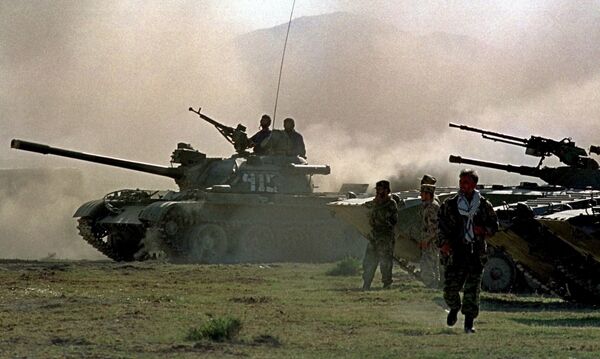 Northern alliance armor warm up their engines, during preparations for an offensive against Afghanistan's Taliban movement in Takhar province, some 15 km (9 miles) from the Tajik-Afghan border in Afghanistan, Thursday, Oct. 4, 2001. The opposition alliance in northern Afghanistan is coordinating its offensive with the United States, an opposition spokesman said Wednesday, and it is expecting fresh arms deliveries from two of its strongest allies in the fight against the Taliban: Iran and Russia.
© AP Photo / Rustam Nazari

The Bush administration opposed any dialogue with the Taliban, and sought to exclude the group from any future Afghan government after it was ousted from power in late 2001. As a result, the Taliban was not allowed to take part in the 2002 Loya Jirga (grand council of tribal elders).

Although there were reports that Obama officials tried to make contact with moderate elements of Taliban membership as early as March 2009, that effort did not materialise, and the Obama administration took a similar non-compromising approach toward the insurgents. Under Obama, the number of US troops in the country grew from a little over 30,000 at the beginning of the campaign to 130,000 in 2010-2011, and the Taliban refused to hold talks until foreign troops are gone.

However, a decade of fighting, thousands of civilians and hundreds of troops killed, as well as billions of dollars wasted, showed that the military option was ill-advised, to put it nicely.

A partial withdrawal of US forces from Afghanistan in the following years, and their handing of security control to local troops, paved the way for negotiations.

Afghanistan’s President Hamid Karzai, who had long advocated for talks with the Taliban, confirmed in June 2011 that the US had opened secret negotiations with the movement, which reportedly broke down by August 2011.

The first-ever open US-Taliban talks were supposed to take place in March 2012, but the group cancelled them because of what it called Washington’s “alternating and ever-changing position”. The move came shortly after the killing of 16 Afghan civilians at a US military base, commonly known as the Kandahar massacre, which significantly worsened NATO’s already lacklustre image in the country. 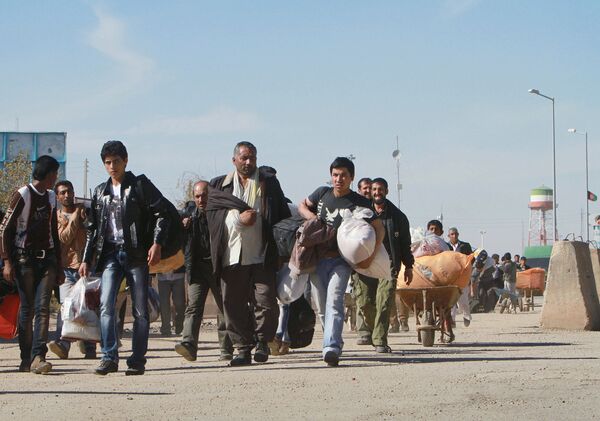 Another notable attempt was scheduled for June 2013, and Taliban had even signalled it could meet the key US demand of breaking ties with al-Qaeda. However, the talks were suspended following backlash from Karzai’s government over the opening of a new Taliban office in Qatar: Kabul was apparently concerned that the mission could turn into a Taliban government-in-exile.

The group regrouped and gained power, and by 2015 it already controlled or contested about one-fifth of the country. That year marked some progress on the intra-Afghan reconciliation track, with the Kabul government sitting down with the insurgents. The process, however, stalled again as the Taliban continued to reject further negotiations – something observers suggested was an attempt to force allies into making concessions.

“It must now be established by America and her allies that the Afghan issue cannot be solved militarily,” the group said. “America must henceforth focus on a peaceful strategy for Afghanistan instead of war.”

Two days later, Afghan President Ashraf Ghani came up with the boldest-yet offer to the Taliban: to recognise it as a political party and release their prisoners if they come to the negotiating table and recognise the Kabul government.

In June that year, Ghani and the Taliban reached an unprecedented ceasefire, followed by secret talks between American officials and Taliban representatives in Qatar. In September 2018, former US ambassador to the United Nations Zalmay Khalilzad took over the newly-established position of Donald Trump’s special adviser on Afghanistan to facilitate a political peace process between the two warring factions.

US-Taliban talks restarted with a marathon two-week session in Qatar in February 2019, ending in an impasse yet with a draft agreement on the withdrawal of US troops and the Taliban’s commitment to sever ties with al Qaeda and other terror groups. The Afghan government, which was notably left out of the Qatar negotiations, objected to being sidelined from the peace process. 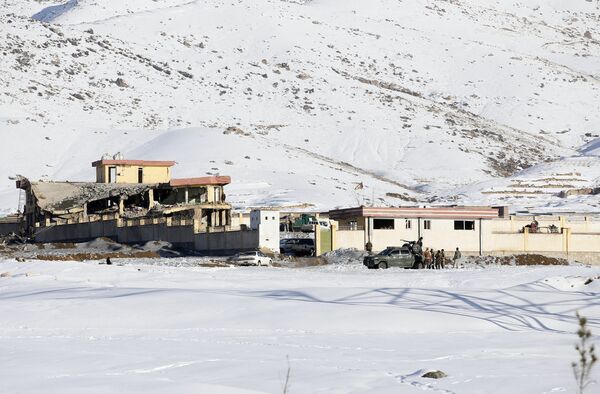 In this Monday, Jan. 21, 2019, photo, Afghan security forces inspect the site of a Taliban attack in Maidan Shar, capital of Maidan Wardak province, east of Kabul, Afghanistan. Afghan official said Tuesday, Jan. 22, 2019, scores of people mostly military personals were killed in the Taliban assault on a military base and a pro-government militia training center a day earlier in the province.
© AP Photo / uncredited

In September 2019, Donald Trump announced he had cancelled secret peace talks with the Taliban that would have brought him face to face with insurgency leaders at Camp David.

He cited a Taliban-claimed explosion in Kabul, which killed 12 people including a US soldier, and concluded that the militants were merely trying to “strengthen their bargaining position”.

The two sides picked up where they left off in December 2019 with two primary goals: to curb violence in Afghanistan and to lay the groundwork for a power-sharing agreement between the Taliban and Kabul.

On Friday, Mike Pompeo said they reached an “understanding” that could result in a “reduction of violence across Afghanistan”. “We are preparing for the signing [of a peace deal] to take place on February 29,” he said in a press statement. “Intra-Afghan negotiations will start soon thereafter, and will build on this fundamental step to deliver a comprehensive and permanent ceasefire and the future political roadmap for Afghanistan”.

Reports have already emerged that the Taliban and Kabul have agreed to reduce violence for a week until an agreement with the US is signed.

000000
Popular comments
Lies from US as usual for re-election purposes....! How can this be a deal when Afghan government is not a party to it...!!!?