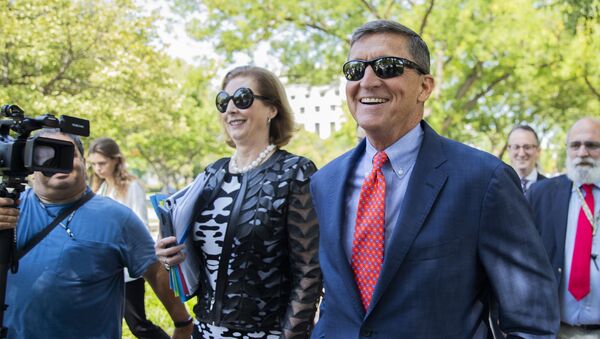 Ekaterina Blinova
All materialsWrite to the author
AG William Barr's decision to tap a federal prosecutor to look into Lt. Gen. Michael Flynn's case over lying to FBI agents has turned the spotlight on the longstanding litigation. American lawyer and politician Patrick Borchers has explained the case's apparent controversies and Barr's abrupt involvement.

On 18 February, the defence team of former National Security advisor Army Lt. Gen. Michael Flynn urged the court to dismiss the general's case on two bases: first, a violation of due process and "outrageous misconduct" by the government and, second, an exercise of a federal court’s supervisory authority.

The brief was filed after Attorney General William Barr in a rare move appointed a chief federal prosecutor to review Flynn's case. Barr's move added to criticism mounting in the press over his decision to reconsider federal prosecutors' sentencing recommendation for President Trump's former aide Roger Stone, who was found guilty in November 2019 on several charges stemming from Special Counsel Robert Mueller's inquiry.

In her 18 February brief, Flynn’s attorney Sidney Powell cited "a stunning report of the Inspector General [Michael Horowitz] that one of the two FBI agents, who broke all protocols to interview Mr. Flynn in the White House on January 24, 2017, was surreptitious participant in a presidential briefing on August 17, 2016".

​According to Powell, the FBI's interview of Flynn was nothing short of a trap in a broader "spygate" effort against Donald Trump.

Prosecutor Van Grack suppressed evidence to protect... "the prosecutors, his team, and the cadre of malfeasant FBI agents from the discovery of their negligence, crimes, and wrongs."

​Patrick Borchers, Lillis Family Professor of Law at Creighton University, in Nebraska, believes that an independent investigation would sort the controversial case out.

Sputnik: What's your take on the legal strategy pursued by the defence team of former National Security Adviser Michael Flynn led by Attorney Sidney Powell since June 2019? From the start, Powell has insisted that the Flynn case should be thrown out citing egregious misconduct and suppression of possibly exculpatory evidence (Brady material) by government prosecutors. Additionally, in October 2019 Powell, raised a red flag over the manipulation of the general's FD-302 interview concerning his lying to the FBI: according to the attorney, FBI agents made "substantial changes" to the Flynn 302 interview. Do Powell's concerns have serious grounds in your opinion?

Patrick Borchers: The case is interesting in many ways. Flynn’s former attorneys saw the matter as strictly a legal matter and negotiated a deal designed to avoid prison time. His current lawyer Sidney Powell has seen it more as a political matter, which has apparently been a successful strategy as Attorney General Barr has directed that the entire prosecution be re-examined.

If the Flynn 302 were substantially changed, that would be very troubling. The government denies this, however. Flynn was not in custody when he made the statements, so he did not have to be advised of his rights. However, although law enforcement officials are allowed to use deception, usually defendants in a false statements prosecution are warned that they are the targets of an investigation.

It is unknown whether Flynn will be allowed to withdraw his guilty plea. Hopefully, an independent investigation will determine whether there was government misconduct in the case. As not all of the factual matters are publicly known, it is impossible to say for certain whether there was misconduct, or Flynn is simply having “buyer’s remorse” over having agreed to plead guilty.

Sputnik: The controversy surrounding the case continued after Judge Emmet Sullivan dismissed the Flynn team's arguments: on 7 January 2020 federal prosecutors recommended that Michael Flynn get prison time although it was previously ruled out due to his efficient assistance to Special Counsel Robert Mueller's "Russia investigation". However, on 29 January they backpedaled on their initiative after Flynn announced on 14 January that he was withdrawing his guilty plea and stated that he did not lie to two FBI agents. Eventually, sentencing scheduled for 27 February was shelved by Judge Emmet Sullivan. What's your take on the litigation? Does it seem unusual to you? What's behind federal prosecutors' back-and-forth move concerning jail time recommendations?

Patrick Borchers: This depends heavily on whom you believe. The government’s account is that Flynn stopped cooperating and signaled that he would not be a favourable witness in an upcoming trial. Obviously, Flynn’s lawyers dispute this account. Without knowing the details of the case it’s not possible to know.

That said, it is unusual to see the government withdraw a sentencing recommendation in favour of a harsher one. The sometimes overlapping jurisdiction between the Mueller investigation and the regular US attorneys may have contributed to the confusion. The politically charged and highly visible nature of the case has caused many aspects of it to be magnified.

Sputnik: Last Friday, Powell suggested that in 2017 FBI officials deliberately interviewed Flynn in a way that kept him from knowing he was the subject of an investigation. For his part, AG William Barr ordered the DOJ to review the handling of Flynn's case. Jeff Jensen, the US Attorney for the Eastern District of Missouri was picked for the job. What's your take on that? Is it standard practice that the attorney general interferes in a case to re-examine it? What's behind the AG's special attention to this case in your opinion? Can we suggest that this case has become a sort of battleground for two different factions within the DOJ (involving some FBI elements)?

Patrick Borchers: It is unusual for the Attorney General to step in directly. I think Powell’s treatment of the case from a political angle probably contributed to it. Flynn’s relationship with Trump probably helped direct Barr’s attention to the matter. Although the FBI agents were not required to advise him that he was a target, usually they do it to avoid an entrapment defence.