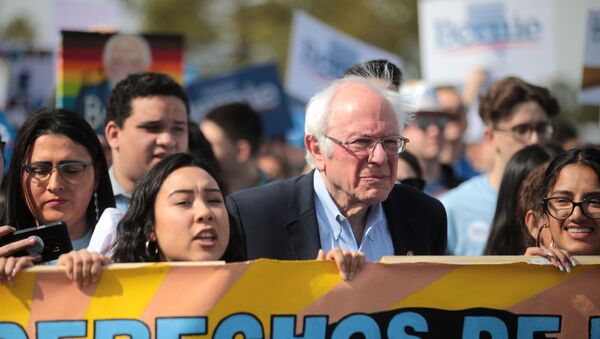 On 22 February, Nevada's Democratic caucus will take place, with Senator Bernie Sander being named as the likely winner. Stan Vaughan, a former US congressional candidate for the state, has weighed up the Democratic hopefuls' chances.

The 2020 Nevada caucus was preceded by a tough Wednesday debate between Democratic hopefuls, dubbed by some media "the most brutal yet" as billionaire Michael Bloomberg found himself caught in the cross hairs of his rivals.

Senator Elizabeth Warren kicked off the debate by castigating the former New York City mayor for calling women "fat broads and horse-faced lesbians". Other candidates followed suit, questioning the billionaires' past remarks on race and policing.

Elizabeth Warren goes for jugular straight out the gate.

​Meanwhile, Bernie Sanders is seemingly cruising towards his second victory, with pollster Data for Progress saying that the progressive candidate holds an almost 19-point lead in Nevada, as cited by The Hills.

According to Stan Vaughan, a former candidate for the US Congress in Nevada, the real winner of the Wednesday event was billionaire Tom Steyer, "who was prevented from participating in [it] and avoided the Wild West Free for All yet ran ads on TV constantly through the night".

"The Wild West type Free for all was the most exciting debate so far of the nine so far, as billionaire former Republican Bloomberg and the Communist Sanders were the main targets of the other four candidates, especially form the current delegate count leader Buttigieg, who had prevailed in Iowa with most delegates there", the politician recollects.

Three people own more wealth than the bottom half of America.

Half our people live paycheck to paycheck.

We must stand up to the greed of large corporations and stand with working families. I make no apologies for that.

​However, according to him, "the desperation from all candidates could be seen plainly": "While everyone attacked Bloomberg as trying to 'buy' the election, audiences across America could see desperate Democrats trying to 'buy' votes in their own ways," Vaughan notes, citing Steyer's ads which proposed $22 an hour minimum wage as well as Warren's promotion of "universal government child care from age zero as just one of the blatantly obvious attempts to buy votes".

The politician believes that Warren emerged as the night's "biggest loser" as she "viciously attacked everyone on stage".

He notes that yet another Democratic presidential candidate, Amy Klobuchar, who is "currently in 3rd place in acquired delegates seemed to have momentum", but notes that she'd put herself in an awkward situation prior to the debate by being unable to recall the name of the President of Mexico, Andres Manuel Lopez Obrador while speaking to Telemundo, "a Spanish language TV station in a state with a large number of Hispanic voters".

What's worse about it is that she is currently on a Senate subcommittee on border security and immigration, Vaughan highlights. "This is akin to the Governor of Alaska not knowing who Vladimir Putin is from the country next door," he adds.

According to the politician, "Bernie Sanders who currently stands in second place in the Democrat delegate count, will probably survive the constant attacks against him to win Nevada and may continue to acquire significant delegates, should move into first place in the delegate count going into South Carolina."

Still, although Sanders may move into the lead after Nevada, the South Carolina race appears to be between Joe Biden and Tom Steyer, Vaughan foresees.

However, according to The Hill, Sanders is just 2 percentage points behind Biden in the polls, with Steyer being the third-place contender.

"In any case delegates will continue to be spread wide, and it is doubtful whether the 14 State 'Super Tuesday' in early March will do anything more than move the Democrats toward a contested Convention later this year," the former candidate for the US Congress in Nevada concludes.