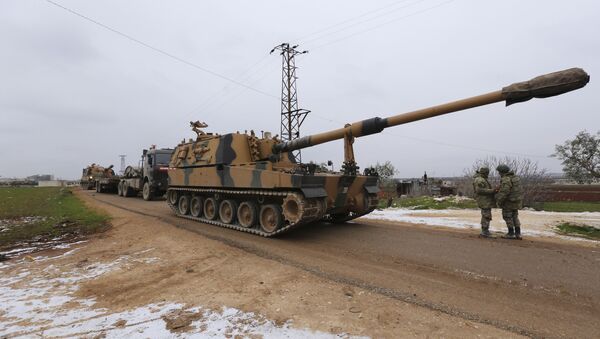 Clashes between government forces and militants backed by Turkey in the northwestern province of Idlib have intensified recently, while the Turkish forces have also carried out several strikes against the Syrian Arab Army.

They also expressed their readiness to facilitate efforts aimed at de-escalating the situation in northwestern Syria.

"Chancellor Merkel and President Macron have said they are significantly concerned over the catastrophic humanitarian situation that people are facing in the Syrian province of Idlib. They have called for immediately ceasing hostilities and ensuring unhampered humanitarian access to those in need. They have expressed readiness to hold a joint meeting with Russian President Putin and Turkish President Erdogan to find a political solution to the crisis", Seibert said.

The Kremlin press service also said in a statement Merkel and Macron "paid particular attention to resolving the Syrian crisis in the context of the sharp deterioration of the situation in Idlib as a result of aggressive actions by extremist groups against the Syrian government forces and civilians".

"Vladimir Putin stressed the need for effective measures to neutralise the terrorist threat while respecting the principles of sovereignty and territorial integrity of the Syrian Arab Republic", the statement added.

The situation in Idlib has escalated recently, as the Turkish army has carried out several strikes against the Syrian Arab Army after five of its servicemen were killed by Syrian forces at an outpost in the rebel-controlled province of Idlib - the last major stronghold of jihadists in the country, prompting President Erdogan to threaten a full-scale military offensive in Idlib at "any minute".

According to the Turkish president, the country's servicemen "had been deployed to the region to prevent conflicts in Idlib".

In December, Syrian government forces launched a counter-terror operation to recapture areas of Idlib province, a region that is mostly under the control of the militants from Hayat Tahrir al-Sham (formerly known as Al-Nusra Front*). As of today, Idlib remains one of the four de-escalation zones, established by Russia, Iran, and Turkey back in 2017, that is not under the control of the Syrian government.

In September 2018, Putin and Erdogan also agreed to establish a demilitarised zone in Idlib, where more than a dozen forces are stationed. Commenting on the situation in the province on Wednesday, Russian Foreign Minister Sergey Lavrov said that a demilitarised zone in Idlib has not been created yet and that militants operating in the area "are not guaranteed safety".