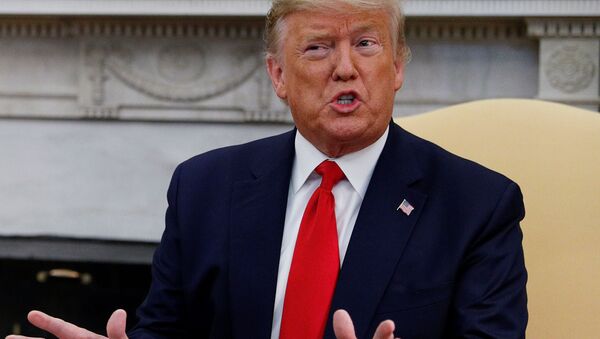 © REUTERS / TOM BRENNER
Subscribe
International
India
Africa
While billionaire Michael Bloomberg was fighting off attacks from rivals at his first debates in the Democratic nomination race, the current US president, running for a second term in office, also launched an offensive against him. Donald Trump’s regular targets, however, did not escape the presidential roast either.

US President Donald Trump has ridiculed former New York City Mayor Michael Bloomberg, competing for the Democratic nomination, for spending $411 million on advertising and for “buying” his candidacy. Another Democratic candidate Tom Steyer and Trump’s 2016 election rival Hillary Clinton were also on the receiving end of Trump’s ire.

"Mini Mike has spent $411 million so far. That idiot [Tom] Steyer, we call him impeachment Steyer, he spent $210 million and look where that got him? I think he got one-third of one percent in Iowa. I never even heard of him. Hillary [Clinton] spent three times more than we did and lost”, Trump concluded, as cited by Fox News.

Trump then shifted to the Democratic debates in Nevada as he was speaking at a rally in Phoenix to trash Bloomberg, who came under fire from other candidates during his first debate.

"Now they have a new member of the crew, Mini Mike. No boxes, we call him no boxes. I hear he's getting pounded tonight. I hear they're pounding him. I think he spent all this money, he has maybe 15 points. Hey, fake news, how many points does he have? They won't tell you the truth. MSDNC [sic] is worse than CNN, and they're all pretty bad”, he said.

He continuously roasted Bloomberg throughout the speech. Democratic frontrunner, Senator Bernie Sanders didn’t come out unscathed either, with Trump blasting his healthcare plan claiming 180 million would lose coverage under it. POTUS also took a shot at Democrats in Washington, saying that they were "more extreme than ever before”.

"They're taking it from crazy Bernie”, the US president concluded, adding later: "Socialist Democrats want to destroy American health care. We’re trying to protect it, and we’re going to protect pre-existing conditions”.

As an example of the Democrats’ poor management, he brought up the ObamaCare website healthcare.gov, which cost $5 billion according to Trump, but was initially discovered to have bugs and glitches.

"Barron could have built you a website for about $2”, Trump boasted of his youngest son’s computer skills.

He also lambasted the Democrats’ latest tech fail with the vote-counting app in Iowa, where it was unclear who won the caucuses because of technical issues.

"I hear a lot of bad things about their vote count. I hear they don't know what they're doing with the vote count in Iowa”, he said, also lauding his success there, adding: "We set a record in Iowa, we had more votes than anybody's ever had for an incumbent president”.

Joe Biden Loses Key Fundraisers to Bloomberg After Plummeting in Polls - Reports
Bloomberg was on the debate stage for the first time, after the Democratic National Committee (DNC), to whom he donated $300,000 shortly before joining the presidential race last year, abruptly dropped the requirement that candidates meet an individual donor threshold to qualify. Bernie Sanders, Elizabeth Warren, and other Democratic contenders all took their chance to hit the billionaire and accused him of trying to buy his way into the elections, denigrating women, and not releasing his tax returns.
Newsfeed
0
Access to the chat has been blocked for violating the rules . You will be able to participate again through:∞. If you do not agree with the blocking, please use the feedback form
The discussion is closed. You can participate in the discussion within 24 hours after the publication of the article.
To participate in the discussion
log in or register
loader
Chats
Заголовок открываемого материала