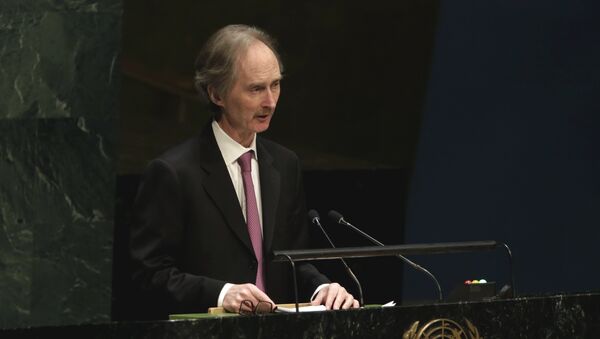 UNITED NATIONS (Sputnik) - On Monday and Tuesday, the Turkish delegation held talks in Moscow regarding the situation in Idlib after the grave escalation there in recent weeks. The talks ended without any agreement, and Ankara announced it was dissatisfied with the negotiations.

United Nations Special Envoy for Syria Geir Pedersen on Wednesday warned the Security Council of the threat of further escalation of violence in Syria’s Idlib province and called on Russia and Turkey to help de-escalate the situation.

“Turkey and Russia, as sponsors of the Idlib de-escalation arrangements, can and must play a key role in finding a way to de-escalate the situation now”, Pedersen said. “To the contrary public statements from different quarters, Syrian and international, suggest an imminent danger of further escalation.”

Pedersen also said that the ongoing hostilities in Syria’s northwest that have already displaced almost 900,000 civilians are now approaching densely populated areas such as the city of Idlib and Bab al-Hawa border crossing with Turkey.

“The potential for further mass displacement and even more catastrophic human suffering is apparent, as an increasing number of people are hemmed into an ever-shrinking space”, the special envoy added.

He also called for an immediate ceasefire in the province of Idlib that would result in a nationwide suspension of fighting in the Arab republic.

"I appeal once again for full respect for international humanitarian law and for an immediate ceasefire in Idlib, ultimately towards a nationwide ceasefire", Pedersen said before the UN Security Council.

Turkish President Recep Tayyip Erdogan said earlier on Wednesday, Turkey was fully ready for its own operation in Idlib and could launch it “any minute.”

In accordance with a May 2017 agreement of Russia, Iran and Turkey, four de-escalation zones were set up in Syria. Damascus gained control over three of them in 2018. The fourth zone, located in Idlib and partly in several neighbouring provinces, remains out of the government control. The zone is mostly controlled by the Nusra Front terrorist group (banned in Russia).

In September 2018, Russia and Turkey agreed to set up a demilitarized zone in Idlib.