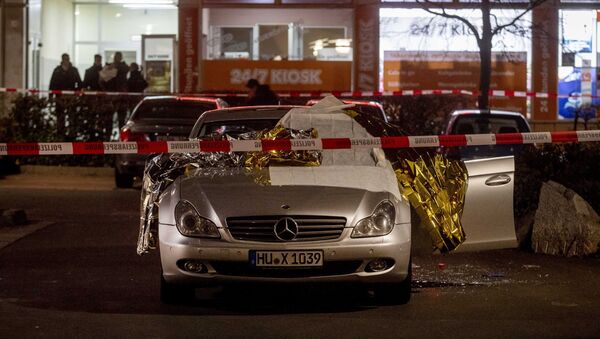 Subscribe
German prosecutors have confirmed that at least nine people had been killed and several others people injured in two shooting attacks in the town of Hanau on Wednesday.

The motive for the shooting remains unknown and German police officials said that the attacker likely acted alone.

The interior minister of the German state of Hesse has confirmed media reports that the mother of the suspected shooter is dead.

German federal prosecutors said Thursday they are taking over the investigating into a mass shooting in Hanau that left at least nine people dead.

"Federal prosecutors have taken over the investigation and there are indications of a right-wing extremist background," said a spokesman for the prosecutors.

German news agency dpa reported earlier that police were examining a video the suspected gunman may have uploaded online a few days ago in which he details conspiracy theories about the United States.

The authenticity of the video couldn't immediately be verified.

"This morning our thoughts are with the people in #Hanau, where an appalling crime was committed. We extend deep condolences to the families mourning the loss of their loved ones. We hope that those injured will recover soon", Steffen Seibert, the German government's spokesman, said on Twitter.

According to the newspaper Bild, the alleged gunman, identified as Tobias R., left a letter and a video confessing his crime.

"After a shooting on Wednesday evening in Hanau... the alleged perpetrator was found dead. According to witnesses, the police received information about a fleeing vehicle, which could be found as part of the large-scale search in the Kesselstadt district. The home address there was blocked off extensively and searched by special police forces. Two other bodies were found. One of the dead people is most likely the culprit. There are currently no indications of other perpetrators. The number of victims who were fatally injured at the crime scenes in Heumarkt and Kurt-Schumacher-Platz increased to nine, so that there are currently a total of eleven deaths. Investigations into the identity of the victims and the suspected perpetrator are ongoin", police said.

The police also tweeted that "there are no indications of other perpetrators at the moment".

Police have arrested at least one person in connection with two deadly shooting attacks in the German town of Hanau, the Bild newspaper reported on Thursday.

Police of southeastern Hessen confirmed on Thursday that two shooting attacks in the German town of Hanau had left eight people dead.

"According to the latest information, police can now confirm that eight people sustained fatal injuries," police said in a statement.