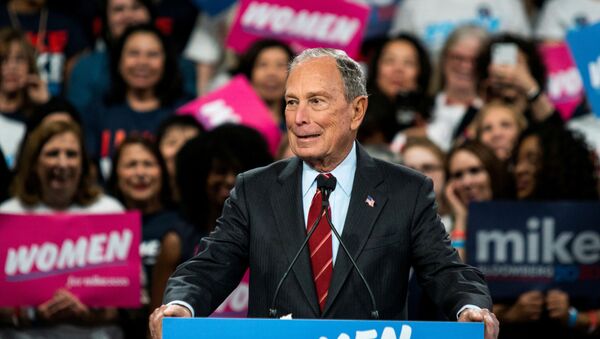 © REUTERS / EDUARDO MUNOZ
Subscribe
International
India
Africa
Unlike the current US President Donald Trump, who has repeatedly been criticised for his refusal to disengage from his business after moving into the White House, the owner of Bloomberg LP and one of the world’s wealthiest people, who aspires to take on Trump in the 2020 elections, promises to choose another path.

Billionaire Michael Bloomberg, who joined the Democratic primary race in November 2019, will sell his media behemoth if he is elected US president, his top adviser Tim O’Brien has said to the Associated Press. According to the tycoon’s aide, he is to put his Bloomberg LP into a blind trust, allowing trustees to sell the company, and give the proceeds to Bloomberg Philanthropies, which offers grants to American cities and funds a range of charitable causes.

Bloomberg, who is the chief executive of the media giant now, will introduce only one restriction on this future deal – a private equity company or a foreign buyer will not be allowed to purchase the company. In his comment on the decision, O’Brien brought up the current US president and Bloomberg’s possible rival at the upcoming election, Donald Trump.

“We want to be 180 degrees apart from Donald Trump around financial conflicts of interest. We think it’s one of the biggest stains on the presidency, and Trump’s record is his refusal to disengage himself of his own financial interests. And we want to be very transparent and clean and clear with voters about where Mike is on these things,” he said.

Donald Trump, who marched into the White House from the real estate business, put his assets in a trust, governed by his sons. It prompted criticism against him for failing to disengage from his businesses and continuing to make money from his properties.

Bloomberg kept ownership in his company while he served as New York City mayor from 2002 to 2013 but stepped down as the chief executive while in office and returned to the post afterwards. However, he signalled that he would sell his business if he were elected president in 2018, a year before entering the race in November 2019.

Bloomberg’s plans to sell his company were revealed ahead of his first stage debates with other rivals for the Democratic nomination, set to take place on Wednesday in Las Vegas. The billionaire, who is self-funding his campaign, is climbing in national polls, pumping his campaign with cash for advertising. Recent polls showed that Bloomberg, who has spent more than any other candidate on advertising, with 19 per cent is right behind front-runner Bernie Sanders, who has 31 per cent.

Although he has not participated in debates before, his rivals have repeatedly challenged him during interviews and public appearances. Apart from his mega-budgets on advertising, the mogul’s alleged sexist remarks and his company’s discrimination lawsuits dug up by The Washington Post have brought him under scrutiny.

How Much Money to Buy the Presidency? Bloomberg Tries to Find Out
The outlet, owned by billionaire Jeff Bezos, revealed a thirty-year-old booklet from a party with Bloomberg’s alleged sexist comments, which his colleagues reportedly compiled, and a history of discrimination lawsuits against Bloomberg LP. The chronicle included a lawsuit, filed by a saleswoman, who alleged that Bloomberg responded “kill it” when she told him that she was pregnant in 1995. Bloomberg denied making the remark, and the lawsuit was later settled.
Newsfeed
0
Access to the chat has been blocked for violating the rules . You will be able to participate again through:∞. If you do not agree with the blocking, please use the feedback form
The discussion is closed. You can participate in the discussion within 24 hours after the publication of the article.
To participate in the discussion
log in or register
loader
Chats
Заголовок открываемого материала