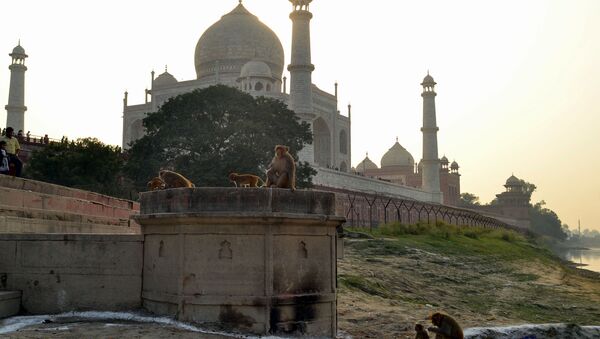 New Delhi (Sputnik): Large scale preparations are on in India to make US President Donald Trump’s maiden visit on 24- 25 February a success. From building a wall in Modi’s home state to beautifying cities that he will be visiting, every measure is being taken to make the visit a pleasant one.

As the Indian state of Uttar Pradesh has revealed that US President Donald Trump will visit the Taj Mahal in Agra on 24 February, the government is undertaking extreme measures such as releasing water into the polluted Yamuna river to reduce the smell coming from it and beautify the city.

However, locals in Agra have different concerns at hand. They are worried that the monkey menace in the city might ruin the US President's visit.

They fear that monkeys might attack Trump during his visit to the Taj Mahal as he will have to walk at least 500 metres.

As per a Supreme Court order, no car can come nearer than 500-metres from the Taj Mahal, and only electric vehicles are allowed. Top government officials have said that "the order will be implemented" even during Trump's visit.

While the Uttar Pradesh government has placed Agra under a security lockdown and nobody is allowed to venture out of their homes on the route that Donald Trump will take from Agra airport to the Taj Mahal, whether measures to avoid any probable monkey attacks are in place or not, is a question that looms large.

Central Industrial Security Force personnel have been armed with hand-held catapults to scare off monkeys from the premises. Still, in the presence of the US President, his security will be managed by the United States Secret Service.

"If a large troop of monkeys attacks Donald Trump's entourage, it will be a disaster," a resident told India Today.

The resident who feared the "disaster" said that sterilisation measures had failed despite a $279,578.6 effort by local authorities.

On Tuesday, an advance US security team also arrived in Agra to survey the entire area. Whether a monkey attack was on their list or not is unknown.

Meanwhile, the American president, along with the First Lady Melania Trump, will attend an event called 'Namaste Trump' at the world's largest cricket stadium in Modi's home state Gujarat.