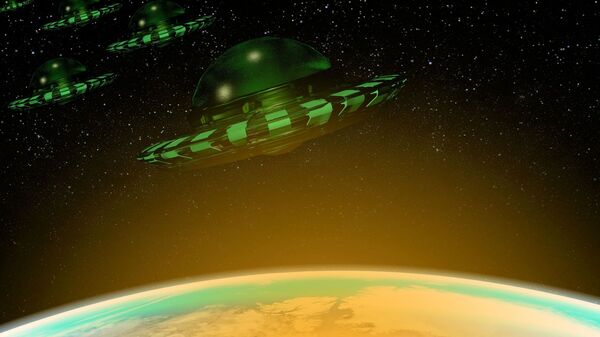 The video of a mysterious shining triangular object over Houston, Texas captured on New Year’s Day, gave online alien hunters and conspiracy theorists new material to process. While some suggested extraterrestrial interference, others sensed that the show has something to do with a secret military programme.

The triangular-shaped object, filmed hovering 9 metres above the ground in Texas a month after a similar sighting has sparked debates among conspiracy theorists and alien skeptics online. The three flashing lights, travelling in a geometric formation towards the cameraman before zooming off, were reportedly captured by a motorist in the sky over the city of Bogata.

The clip was first posted on the Mutual UFO Network, dedicated to sightings, with the following description: “It was flying right at me going 75mph and then it hovered over my car for one second and disappeared”. Its authenticity has not been confirmed but the footage was later shared on YouTube by the conspiracy channel UFOmania, which harvested over 7,000 views and numerous comments with users trying to guess what the object was.

The commenters were split about what the enigmatic orbs were. While some suggested that these could be alien guests, others claimed it could be a supersonic stealth surveillance plane, known as TR-3B and speculated to have been developed for the US Air Force although its existence has never been acknowledged.

“That's a TR3B, or a for real ET craft, just wish he could have stopped the car, got out and took more footage”, one user noted, while another added: “TR3B, look it up...”

Many added that they had witnessed similar objects in different US states, from Indiana to Oklahoma. However, some seemed less than impressed and concluded that the alleged UFO was nothing more than a mundane drone.

“Seen Even Every Day”: Texas Has Become a Hotspot of UFO Sightings, Claims Researcher
The video emerged a month after a similar clip showing what looks like an enormous triangle-shaped UFO over Houston, Texas, on New Year’s Day tickled the imagination of online commenters. It showed three lights apparently dancing in the night sky and maintaining formation and prompted conspiracy fans to offer alien- or military-related theories as an explanation.
Newsfeed
0
Access to the chat has been blocked for violating the rules . You will be able to participate again through:∞. If you do not agree with the blocking, please use the feedback form
The discussion is closed. You can participate in the discussion within 24 hours after the publication of the article.
To participate in the discussion
log in or register
loader
Chats
Заголовок открываемого материала