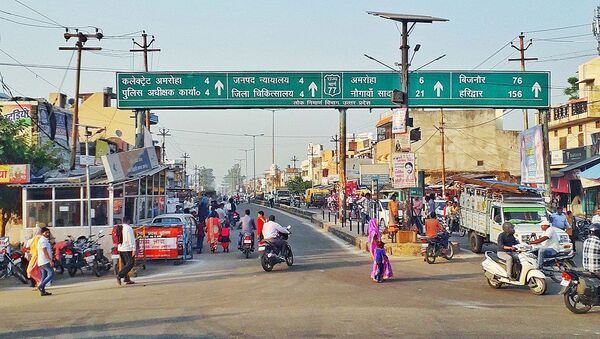 New Delhi (Sputnik): As per the latest National Crime Records Bureau (NCRB), which comes under the Federal Home Ministry, as many as 62 murders related to road rage incidents were reported across the country in 2018.

Clashes between two groups of men, led by the sons of the leaders of the Uttar Pradesh branch of the ruling Bharatiya Janata Party (BJP) and opposition Samajwadi Party (SP), ended with the death of one person.

The incident occurred in Aligarh - 200 kilometres south-east of the national capital Delhi late-night on Monday 17 February following a motorcycle collision involving the sons of local BJP politician - Ishwar Chand Upadhyay and SP politician Puranmal Prajapati. An argument after the accident snowballed into a group clash with supporters of both sides joining, said Uttar Pradesh Police.

During the clashes, Prajapati's son was shot dead, while at least six persons including the younger brother of the deceased and a policeman were injured.

"The incident turned violent as supporters of both sides joined and started pelting stones and firing, in which Prajapati's second son identified as Sachin Prajapati, who tried to come to the rescue, was shot dead," said a senior police official on Tuesday.

"We have arrested three people in connection with the case while the main suspects are still on the run. We are also questioning the family members to ascertain if the two sides had any old enmity," said Arvind Kumar, Superintendent of Police (Crime).

In another incident on Monday night, a bunch of men thrashed three women, dragging them out of a car and beating them in the middle of the road in Kanpur, Uttar Pradesh.

The BJP ruled state, headed by ascetic chief Yogi Adityanath has recorded the highest number of crimes in the country, according to data released by the National Crime Records Bureau, under the Federal Home Ministry.