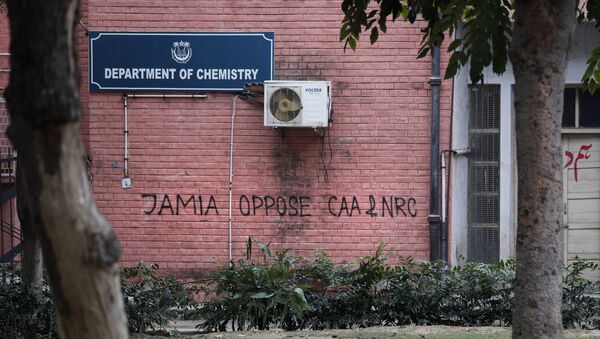 A university student has been named in a police charge sheet concerning the violence witnessed during the 15 December protests by students of India's premier university Jamia Millia Islamia against the country's new citizenship law (CAA).

As per the charge sheet filed on 13 February, Sharjeel Imam, a student from Jawaharlal Nehru University (JNU), located in the same city, has been named as an "instigator".

A Delhi court on Tuesday sent him to Judicial custody until 3 March.

Five states in India have already filed sedition charges against Sharjeel Imam, a research scholar from one of Delhi's top universities JNU for his anti-government speeches made during protests against the CAA. He was arrested last month in his hometown of Bihar.

According to the police, they had also found empty bullet cartridges of a 3.2 mm pistol recovered from the protest spot.

"We have attached CCTV footage, call detail records and the statements of over 100 witnesses as evidence in the charge sheet, a police official said.

Police said so far they have arrested 17 people in connection with the case while they are examining the role of Islamic outfit Popular Front of India (PFI).

In the last few days, the Jamia University administration and Delhi Police have been releasing video clips showing what happened on the Jamia campus that day.

The college administration claims that innocent students were beaten up by police which barged onto their campus, Delhi Police, however, claim the rioters had taken shelter inside the university's campus.

On 15 December, police had to use tear gas shells and cane-charges to control the mob. Police allegedly dragged students out of Jamia Millia Islamia university in Delhi after the ongoing protest turned ugly. More than 100 activists and 35 policemen, including some senior officers, were injured.

Over the last few weeks, India has witnessed large-scale protests against the Citizenship Amendment Act (CAA) across the country. In some places, these protests turned violent.

The Indian federal government enacted the CAA on 13 December 2019 to provide citizenship to illegal non-Muslim immigrants of minority communities from three neighbouring Islamic countries, Afghanistan, Bangladesh, and Pakistan who arrived before 2015 and faced persecution at home.

The protestors in the country are annoyed that the CAA does not extend the same privilege to Muslims. Therefore they view it as discriminatory to Muslims and against the provisions of the Indians Constitution which promotes equality for all. Prime Minister Narendra Modi, however, has clarified no Indian citizen will be affected by the law as it "seeks to grant citizenship, not snatch it". The law is related to immigrants and not local citizens.