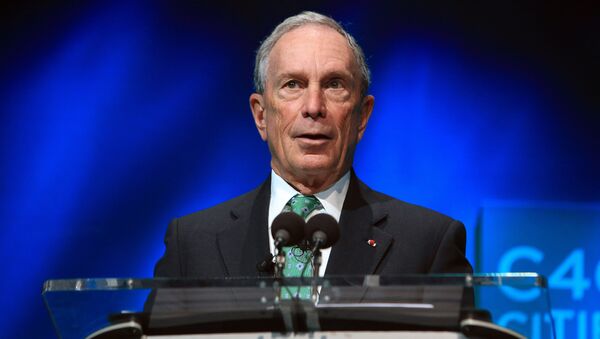 © AP Photo / Thibault Camus
Subscribe
The former New York City mayor and media mogul, who jumped into the 2020 election race shortly before the window closed, has pumped money into advertising and spent more than any other candidate, but failed to qualify for any debates. Although his contenders cannot face him on stage that has not stopped them from lambasting the 78-year-old.

Several Democratic candidates in the 2020 nomination race have taken aim at their billionaire rival Michael Bloomberg, who has not qualified for any debate since he joined the race in November 2019. Since the media mogul could be included in an event on Wednesday if he manages to score more than 10 percent in another poll, one of his contenders, Minnesota Senator Amy Klobuchar has done some sabre-rattling. She pointed at his spending on campaign advertisements, which have surpassed other candidates’ budgets, warning she could still beat him in a face-off.

Former Vice President Joe Biden echoed her wish to square off against Bloomberg on stage, promising to challenge him about his support of the “stop and frisk” policing strategy from when he was New York City mayor. Although Bloomberg apologised for this approach, alleged to be racially biased as more black and Latino people were targeted, Biden does not want to let it go.

“The point is that $60 billion can buy you a lot of advertising, but it can’t erase your record”, the candidate told NBC.

Their rival candidate, former South Bend mayor Pete Buttigieg, has challenged Bloomberg over the mogul’s alleged sexist remarks and his company’s discrimination lawsuits dug up by The Washington Post.

“I think he’s going to have to answer for that and speak to it”, one of the Democratic frontrunners told “Fox News Sunday”.

On Saturday, the outlet, owned by billionaire Jeff Bezos, revealed a thirty-year-old booklet from a party with Bloomberg’s alleged sexist remarks, which his colleagues reportedly compiled, and a history of discrimination lawsuits against Bloomberg LP. The chronicle included a lawsuit, filed by a saleswoman, who alleged that Bloomberg responded “kill it” when she told him that she was pregnant in 1995. Bloomberg denied making the remark, and the lawsuit was later settled.

His campaign spokeswoman Julie Wood downplayed the report, insisting that her boss does not tolerate discrimination.

“Virtually all of this has been reported over the past two decades. In any large organisation, there are going to be complaints - but Mike simply does not tolerate any kind of discrimination or harassment, and he’s created cultures that are all about equality and inclusion”, she said.

Black Mayors, White Players: Stop & Frisk Bloomberg Buying Black Votes
The campaign has already denied allegations of a hostile environment for women in his company. The mogul himself defended it as “a great place to work” in January, telling ABC’s “The View” that it has “very few” cases of sexual harassment. He also said he regretted his past remarks.