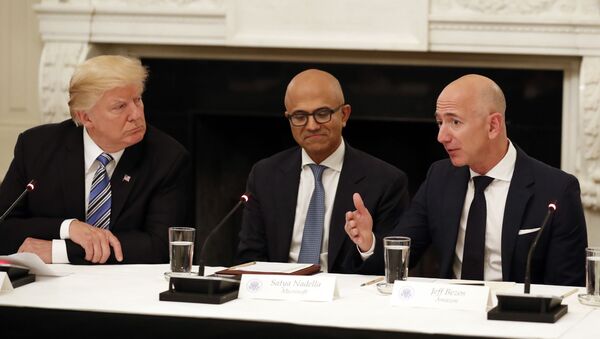 © AP Photo / Alex Brandon
Subscribe
A federal judge in Washington, DC, told Microsoft on Thursday to stop working on a $10 billion cloud-computing contract for the Pentagon. Microsoft may owe the lucrative deal to US President Donald Trump’s feud with Amazon CEO Jeff Bezos, according to economist Steve Keen, the author of “Debunking Economics.”

The decision by Judge Patricia E. Campbell-Smith of the Court of Federal Claims comes after Amazon requested the US court halt Microsoft’s engagement in the Joint Enterprise Defense Infrastructure (JEDI) process because the bidding process had “clear deficiencies, errors and unmistakable bias.” In its complaint, Amazon accused Trump of attempting to “harm his perceived political enemy - Jeffrey P. Bezos, founder and CEO of AWS’s [Amazon Web Services] parent company, Amazon.com ... and owner of the Washington Post.”

Although Amazon was widely expected to win the JEDI contract, it was awarded instead to Microsoft in October 2019. The Department of Defense project consists of shifting much of the Pentagon’s technology needs to a commercial cloud - a field in which Amazon makes most of its profits.

“The extent to which Trump has put his own people in charge of sections of the American bureaucracy and directed finance toward his own companies and away from his rivals is evident … this is consistent with that behavior,” Keen told hosts John Kiriakou and Brian Becker of Radio Sputnik's Loud & Clear, also noting that he tends to “regard Amazon as being more innovative in overall behavior than Microsoft.”

In the 103-page complaint it filed in December, Amazon wrote: “The question is whether the President of the United States should be allowed to use the budget of the DoD to pursue his own personal and political ends.” Amazon on Monday also requested that the court allow it to depose Trump and Defense Secretary Mark Esper over the awarding of the contract.

According to Keen, power “dominates” the American system, with “leadership and financial power” driving decisions rather than “political decision making and democracy.”

“There is enormous wealth being made out of this. [It] tends to be the interest of the wealth rather than the quality of what is being manufactured that comes to the fore … you’re never going to avoid fortunes beng made out of government links when the government is such a substantial part of the economy - and frankly has to be a large part of the economy, so the only thing you can have is … checks and balances,” Keen argued.

“What Trump is kind of doing is going right in and disrupting those in a much more blatant fashion than any previous president would have dared to do … If you get political interference like this, where the politics matters more than the actual technology, then you can be saddled with that indefinitely as a country,” he added.

Daniel Ives, an analyst for Wedbush Securities, appears to agree.

In a recent statement to the New York Times, he described the JEDI contract as a “political football.”

“This is all setting the stage for a major court fight between Amazon and Microsoft, with the DoD caught in between. It’s a political football that’s being kicked around,” Ives said.