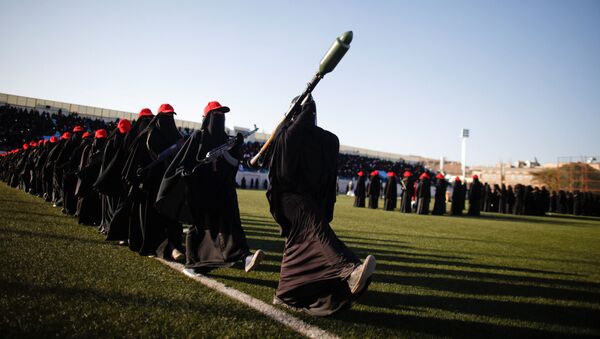 © REUTERS / Khaled Abdullah
Subscribe
Iran has rarely commented on the extent of its cooperation with Yemen’s Houthi militia, which maintains de-facto control over a wide area of the war-torn country and has been fighting a Saudi-led military coalition attempting to restore its ousted government.

Revolutionary Guard Aerospace Force Commander Brig. Gen. Amir-Ali Hajizadeh has called on Iran’s partners in the unofficial ‘Axis of Resistance’ alliance to join together to defeat the US and Israel.

“All countries of the Axis of Resistance are united, and we must join hands to kick American troops out of the region and annihilate the Zionist regime,” Hajizadeh said, speaking to Yemen’s pro-Houthi al-Masirah television.

Boasting of the growing power of the alliance, the commander said that “today we are not only an Iranian Axis of resistance. Rather, the scope of the Axis of Resistance extends from the Red Sea to the Mediterranean and from Yemen’s Ansar Allah [Houthi] movement to Lebanon’s Hezbollah.”

Commenting on last month’s Iranian missile attack against US forces in Iraq in response to the killing of a senior Iranian commander in Baghdad, Hajizadeh suggested that the strikes severely damaged America’s reputation as a regional hegemon.

On Thursday, US Central Command announced that the USS Normandy guided missile cruiser stopped and boarded a vessel in the Arabian Sea last Sunday and seized a “large cache” of Iranian-made weapons in the course of maritime security operations including anti-tank guided missiles and Iranian surface-to-air missiles, thermal imaging scopes and drone components, as well as other munitions and advanced weapons parts.

Iran has been cautious with regard to US, Saudi and Israeli claims suggesting that it provides weapons to the Houthis. The Houthis themselves have repeatedly downplayed their affiliation with the Islamic Republic, and Tehran has said that the Saudi-led coalition’s blockade of the war-torn country has made delivering assistance all but impossible.

At the diplomatic level, Tehran has repeatedly slammed the Saudi-led military campaign against Yemen, and offered to mediate to resolve the conflict.

Yemen became mired in a foreign-backed civil conflict in early 2015, following an uprising by the Houthi movement which ousted President Abd Rabbuh Mansur Hadi. Hadi fled to Riyadh, and Saudi Arabia and a coalition of mostly Gulf allies launched a military operation in the southern Arabian country in March 2015. Five years on, the Houthis continue to maintain control of large swathes of Yemen, and have occasionally launched missile and drone attacks against targets in southern Saudi Arabia. Peace talks began in Stockholm, Sweden in December 2018, but have yet to reap results as both sides accuse one another of violating the ceasefire. On Saturday, a Saudi coalition spokesman confirmed that a Saudi warplane had crashed in northern Yemen. A day earlier, the Houthis reported downing an “enemy jet” using a new cutting-edge surface-to-air missile.